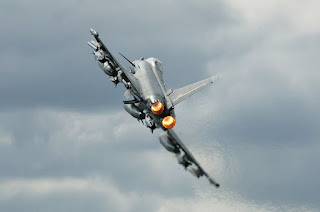 There has been another significant UFO sighting in the northeast coastal area of , see background links below for the previous case. A strange object was seen by several people in on Monday; it was widely discussed on Facebook. It was described as being like an aeroplane, having a short body with no wings or tail. Sounds like a cigar-shaped object. In one instance, it hovered silently in the air somewhere above the vicinity of . It flew away too quickly for the witness to video record it. There were other reports the same day and the authorities appear to have taken them very seriously. The Royal Air Force scrambled two Typhoon fighter jets from RAF Lossiemouth in the northeast of . These aircraft were armed with a new kind of air-to-air missile called Meteor. Source: https://www.hulldailymail.co.uk/news/hull-east-yorkshire-news/round-silent-aircraft-east-hull-2314260, and: https://news.sky.com/story/raf-typhoons-scrambled-in-response-to-unidentified-aircraft-approaching-uk-11577082. The Ministry of Defence is not saying anything about what kind of "unidentified aircraft" this quick reaction alert was all about. There have been several incidents in the last few months where Russian aircraft have flown close to British airspace and this could be another of those. However, in the other cases this information was released publicly; this time it has not. I suspect there may be a connection to the UFO seen over Hull. Something similar happened two and a half years ago and the government made up an excuse to hide the real reason for the operation, see the background links below. Aerial interceptions of UFO's are quite a regular occurrence and a large proportion of government files on UFO's concerns these incidents. They date back to 1932 when the Swedish Army Air Corps took off to investigate sightings of "ghost rockets" flying over . A pilot was once killed when his plane crashed during an interception of a UFO in January 1948. The official report said Capt. Thomas Mantell had fallen unconscious from altitude sickness while chasing a balloon. The skeptics love their balloons! This sounds rather like the lost airliner cover story from the 2016 case.
See here for background: http://hpanwo-voice.blogspot.com/2016/05/uk-jets-scrambled-for-ufo.html.
And: https://hpanwo-voice.blogspot.com/2016/05/yorkshire-ufo-update.html.
And: https://hpanwo-voice.blogspot.com/2016/05/yorkshire-ufo-update-2.html.
Posted by Ben Emlyn-Jones at 18:41

Why do astronomers trained to look at the sky never spot UFOs? It is always uneducated plebs like yourself. Bet you don't publish this. Well you are uneducated, and you and I are both plebs, hoi polloi by definition so there are no insults only truths written here.

Actually, Garry, astronomers do spot UFO's. However most of them don't speak openly about it for political, psychological and cultural reasons. Many of them come out as witnesses anonymously. One of the world's first recorded UFO photos was an astronomical one.

Please, is that your best argument? If they don't come forward then how do you know they don't? Are you mates with loads of astronomers? I tell you what you are getting worse with these feeble responses of yours. 'Political, psychological and cultural reasons' what does that even mean? And why? Show me some proof or am I wasting my time?

PP @ Garry, yeah you're wasting your time with that attitude.

FFS, try reading some of the background links and other things I've produced. I have explained what I mean many times in detail. I'm not repeating myself here because you're too bone idle to use the search box.

You like cricket right? Well seeing as you live in a non-First Class County do you have a favourite first class county team? I bet it is Middlesex or Surrey because they are nice.

Don't worry I believe you about the UFOs, who couldn't?

Ben. What is the most compelling ufo photograph ever taken and how do you know it wasn't faked?
Trigg

Trigg, there are a number I could think of. For example the Calvine photo. One of the reasons I don't think they were faked is that the technology to do so was not available at the time they were taken. Nowadays that technology is so widely available that the signal-to-noise ration problem has become insurmountable. Photographic evidence no longer carries the weight it used to.

So we are left with eye witness testimony which is crap. Therefore no evidence for aliens on earth.

Yes there is. It's not just eye-witness.