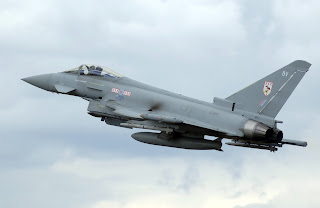 (Thanks to my Facebook friend Martino for bringing this to my attention.) Something unusual happened on Monday night in . Loud explosions were heard in an area centred on , but were heard as far away as . These turned out to be sonic booms caused by high-speed aircraft. The Royal Air Force announced that it had scrambled Typhoon fighter jets from RAF Conningsby because of an "unresponsive civilian aircraft" in the vicinity. In the post-9/11 world these matters are taken very seriously. Air issued a statement saying that it was one of their aircraft that had gone off course on a flight from to and was not answering radio messages, see: http://www.bbc.co.uk/news/uk-england-36188979. The fighters located the aircraft and reestablished communications. They escorted it until it landed safely at its destination. However Sorcha Faal's WhatDoesItMean.com website published a very different news story on the case. It is unequivocally entitled Northern England Stunned After British Fighter Jets Battle UFO. It claims that a Russian report reveals a very different story to the one put out by the officials. There was no missing French airliner; instead the fighter jets were sent to intercept a UFO that appeared over the . The media in was then issued with a "defence advisory notice" which forbade them from covering this story. As with her last stunning revelation, see: http://hpanwo-voice.blogspot.co.uk/2014/01/edward-snowden-ufo-disclosure.html, Sorcha does not provide a proper source for this information. The hyperlink in the text merely leads to the Russian Ministry of Defence's homepage. However there is also a screenshot of a FlightRadar.com page which shows that an RAF Airbus KC2 tanker was deployed from RAF Brize Norton in Oxfordshire at the time, not far from me, which headed towards the general area of fighter operations. It circled over and then headed out to sea where it flew in a holding pattern for a while. See: http://www.whatdoesitmean.com/index2035.htm. This is not unexpected, after all nobody knew how long the fighters would have to stay airborne during this emergency and they might need to be refuelled in midair. The tanker's location was a short distance from the scene, but that might be because it needed to keep out of the way in case any shooting started. The presence of a tanker is not in itself evidence that the official story is incorrect. What I do find strange is that such a breakdown can occur on a modern airliner. It will no doubt have a redundancy system built in to act as a backup if the main communications and navigation systems fail. Also there are no news reports of interviews with the passengers. Why did no reporter visit the airport to talk to the people coming off the plane? We have no "I was flying back from a quiet weekend in . I thought everything was normal; then these fighter jets showed up outside the windows!" interviews? It's possible the aerial activity over the north of earlier in the week was indeed connected to a UFO incident, or something else that the authorities do not want us to know. Ever since aircraft have been flying, there have been occasions when they've been sent up to investigate strange phenomena in the sky; the earliest reported was over Sweden in 1930 and all through the cold war incidents very similar to what happened this week took place, see: http://hpanwo-radio.blogspot.co.uk/2015/07/programme-145-podcast-pia-knudsen.html. and: http://www.dailymail.co.uk/sciencetech/article-1078970/U-S-fighter-pilot-I-ordered-24-rockets-UFO-flying-East-Anglia.html. Has this happened again? Maybe so. There are certainly discrepancies in the official story.
Posted by Ben Emlyn-Jones at 19:33

Thanks Ben, I just looked up Sorcha Faal and it seems he/she is said to be
putting out regular hoax reports, so don't know what to make of this.

Yes she does unfortunately, Tino. The only reason I cite her is the discrepancy over the airliner, tech details etc

I have friends who live on the Newcastle airport flight path and they saw the airliner coming in and yes jets were accompanying it...so unless they fought off the ufo and then used the airliner as a cover story? It does appear no ufo.....but who knows.....

My friends live on the flight path and saw the airliner come in with accompanying jets? Story does seem strange so who really knows ... agree some discrepancies. ..its strange.

Hi Martin and Unknown. I'm about to publish an update on this case.

I live in Newcastle and it was reported on the news that two jets were scrambled, to me it sounded more like five or six

It sounds like a major deployment, GR. More than two for sure