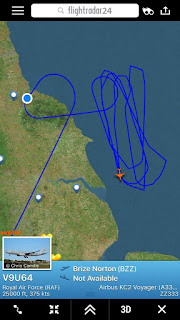 On Thursday the fifth of May I reported on a possible UFO event over the off the coast of two days earlier. This was responded to by the government, deploying Royal Air Force fighter aircraft which attended the scene at transonic speeds, see: http://hpanwo-voice.blogspot.co.uk/2016/05/uk-jets-scrambled-for-ufo.html. Since then more information and analysis has come to light. Thanks to all my Facebook and Twitter friends who have helped provide this. Several people in the local area have told me that the official story is true because they saw the alleged lost Air airliner under escort by two RAF Typhoon jets landing at 's airport. There has also been a photo published in the local newspaper, The Boston Standard, see: http://www.bostonstandard.co.uk/news/local/sonic-boom-picture-lincolnshire-s-typhoon-jets-captured-on-camera-going-supersonic-in-amazing-photo-1-7363173. Personally that looks more like the "unidentified flying ladder" to me. The RAF Airbus KC2 tanker has also returned to the same area from Brize Norton a few times. This indicates that there are continuing operations in that region. Somebody I know who lives hear RAF Conningsby told that they have heard a lot of aircraft takeoffs recently since the third of May. There continues to be no word at all from the passengers of the alleged airliner, and not just in the TV news interviews, but on social media. In this day and age anything unusual that happens would be immediately captured on camera. This film was made by somebody I know, an old hospital portering friend, see: https://www.youtube.com/watch?v=n48NpNQXUCY. It seems that not one of the hundred or more people in the seats of that plane have published anything on YouTube etc. Why not? It's not every day you get to see military jets approaching and flying alongside your plane. However somebody has mentioned on YouTube that he was contacted by somebody on board a fishing boat who saw a circular object out at sea, see: https://www.youtube.com/watch?v=rKmwcvsELpc. Personally I don't think the Baltic Sea Anomaly has anything to do with this. The is a long way from the Baltic; being American he probably has a lack of geographical awareness of the world beyond the borders of the . The Baltic Sea Anomaly is probably more related to hidden archaeology than UFO's, see: https://hpanwo-voice.blogspot.co.uk/2012/01/ufo-down-on-baltic-seabed.html. The above video also relates a similar tale of something that happened the previous month. It publishes a photo supposedly taken in on the third of May showing a white disk-shaped object over an inland urban scene. So are we facing a UFO incident, or a USO? USO stands for "unidentified submerged object", although they appear to be the same thing both above and below the sea. If I hear any more about it I'll be sure to post another update.
Posted by Ben Emlyn-Jones at 20:53

The photo of the inland ufo at the end of the secureteam10 YT video is from a year or so ago Ben and that was actually
from a report of a sighting in Middleton, Manchester, not far from where I live.

Thanks for the info, Tino.

Hi Ben,
2 days ago I spoke with the father of the Squadron Leader who piloted the the Typhoon jet who caused the sonic boom over the Leeds area. The father is a patient of mine. He gave me verifiable evidence. I cannot disclose his name for professional reasons but I know his testimony to be true. He confirmed that the original scramble was to respond to an unresponsive Air France jet. More than that I cannot say. All that I know is that the father stated that he received this information from his son on the day. He gave this information to me spontaneously and I hadn't even entered any conversation with him prior to this.
Best Neil

Hi Ben
On Thursday 12/05 I spoke with a patient who stated that his son, a Squadron Leader, had been scrambled to intercept a non-responsive Air France jet in the Leeds area. His Typhoon Jet broke the sound barrier and he had been authorized to do so. I had made no conversation with the patient prior to this. The information was given to me voluntarily and spontaneously. That's all I know, but I can say the source is as sound as a pound.
Neil

Thanks for the info, Neil.