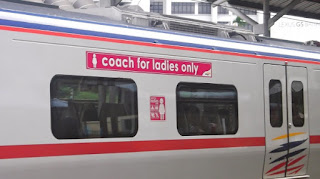 Railways are industrial society's oldest and most fundamental form of long distance transport. As a result they have always been very politically and economically charged. It's just been announced that Southern Rail has voted to strike following the company's decision to introduce driver-only trains, see: http://www.surreymirror.co.uk/Southern-rail-strike-Train-drivers-vote-walk/story-29323915-detail/story.html. Up till now, Trains have always had at least two crew-members; a driver and conductor. The conductor's main job is to take care of the passengers; ensure their comfort and safety during the journey. Trains and railway stations are also infested with CCTV cameras and they even have a special police force, the British Transport Police. Therefore I have to wonder at new proposals suggested, to his disappointing discredit, by Jeremy Corbyn, UK Opposition leader and one of the few statesmen in the country I feel any sense of respect for: women-only coaches. A women-only coach is a compartment on a train designated for the use solely of female passengers. These are not a new idea; in fact a lot of British trains had them until 1977 when equal rights legislation outlawed them... those were the days when the term "equal rights" was meant literally. Today women-only coaches can be found in many other countries; they're most common in , and , see: http://www.theguardian.com/politics/2015/aug/26/women-only-train-carriages-a-possibility-under-jeremy-corbyn. The rationale is that it protects women from being the victim of violent crime, especially sex attacks. Over a thousand such crimes were reported in 2014. There are many issues associated with women-only coaches. To begin with, why has CCTV not been enough to stop violent crime on the railways? Weren't we promised that it would? We gave up our privacy because of that promise; why has Big Brother not delivered? Also, why not scrap the proposals to do away with the conductor? Having a member of staff on board the train whose role it is to defend passengers from harassment by other passengers is a vital deterrent and source of security. Despite this there are still calls from the feminist lobby and their allies in government to bring in this Apartheid system on British trains. My concern is, what effect will this have on human society? As with much of feminism, see background links for more examples, this superficially benign measure could do catastrophic damage to our psychology. To women the message is: "You are not a sovereign individual. You are a mere component in a political dynamic. You are an oppressed victim of men (specifically white heterosexual men). All of them will rape you unless the state protects you from them. They are your enemy. Form no loving or friendly relationships with them. Interact with them only as a means to exploit them and/or achieve indiscriminate abstract revenge." For men the message is: "You are not a sovereign individual. You are a mere component in a political dynamic. You are a rapist. I know you think that you are not. You might even tell yourself that you would never dream of harming a woman. But this is complete self-delusion. If it wasn't for the power of the state holding you back, your inner demon would burst out and you would immediately become a rapist serial killer. You are evil. You must feel guilty. Form no loving or friendly relationships with women. Instead fear them as conduits to the awareness of your true self; a violent, sadistic, brutal monster." I know it doesn't sound like a big deal: "Who cares if women have their own coaches?" I hear you say. But it is a big deal; in fact it may poison our culture and mass psychology. What's more I believe it is intended to do just that. Along with organized religion, cultural Marxism is the most devastating and virulent type of mind control ever invented. Feminists are the brainwashed shock troops of their agenda. The actual definition of sexual harassment is being liquidized and broadened. Words like "misogynist", "rapist", "sexist" are used so casually and liberally nowadays that they have lost their original meaning. They're tossed around like sweeties to the point that people no longer recognize the genuine article. This is why radical feminists will happily stroll past the embassy of without giving it a second look, even though that country has the worst women's rights record on Earth. A Saudi woman can be beheaded in public for simply cheating on her husband. No, the feminist will pass by on the other side while heading to a picket of the office of a university professor who used the word "mankind" in a lecture. All this is intentional and purposive, and it is leading up to an appointed end: nothing less than the conquest of the human mind. For the elite propagandists carrying out this agenda they don't care if you're male or female, black or white, gay or straight. All of us are farm animals and we're being led to the slaughter. Women only coaches are another hoof-step in that direction.
See here for background: http://hpanwo-voice.blogspot.co.uk/2014/10/rape-axe.html.
And: http://hpanwo-voice.blogspot.co.uk/2015/12/cultural-marxist-cleared-of-racism.html.
And: http://hpanwo-voice.blogspot.co.uk/2016/02/richard-dawkins-banned.html.
And: http://hpanwo-voice.blogspot.co.uk/2015/06/jason-wilson-on-cultural-marxism.html.
Posted by Ben Emlyn-Jones at 10:09

This smells bad Apartheid in Britain. Womens rights are being violated set them apart from society in this way. Some poeple may think this is a good idea There always people who are happy to sell their hard earned freedom for safety even as this means a society controled by the government. Mark my words it's agenda21 in progress. More laws will come to protect society Hope the poeple will act before it's to late but a got a bad feeling that this will not happen. The future is bright my ass.

Thanks for the post Ben. Interesting how different 'Groups' (Groups created & dilineanated by the state & the supremacist mindset) are taught to perceive themselves and are presented to other groups by the state. I say this as the article outlines that it is Straight-White-Males that are to be feared, when in my experience it is also very much a 'Fear-The-Brown-Black' face, especially an increasing rubric for many innocent Muslims and due to the economic-engineered-crucible of state breakdown and poor wages etc (the pre-cursor to the hardening of the far-right, social tension & all damaging 'orthodoxy'. Of course, this has also been used for the Irish, The Socialist, etc, etc. This is the disparity that those that make these decisions want and are creating due to our failure of inspection & Wisdom.

Marco and Xyylomet. Thanks for your comments. Sorry I don't have time to reply in detail.

On a lighter note, the accompanying image reads, "coach for ladies only." As there are not many of these around these days, it begs the question whether the majority of the female population going to be excluded too?