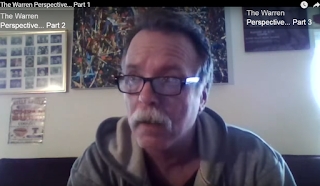 See here for essential background: http://hpanwo-voice.blogspot.co.uk/2017/03/the-larry-warren-controversy-part-8.html.
Last week Colonel Charles I Halt was featured on the ADX Files radio show with Alyson Dunlop, see: https://www.spreaker.com/user/enemywithinradio/adx-49-colonel-halt. In this programme Col. Halt spends a large portion of his precious air time criticizing his fellow UFO witness Larry Warren and Larry's co-author Peter Robbins. He does so too in his new book The Halt Perspective that he wrote with John Hanson, see: https://www.amazon.com/dp/0957494491. Although I know it is generally regarded as a rather naive and quaint idea nowadays, I always advocate listening to both sides of every story. Tino has recorded an interview with Larry in which Larry replies to the comments made about him by Col. Halt. Please do not accept the information from Col. Halt without first listening to this too.
Part 1: https://www.youtube.com/watch?v=4YxfLqcGbJU.
Part 2: https://www.youtube.com/watch?v=GdsfRXPMu2I.
Part 3: https://www.youtube.com/watch?v=7nkn-J0OJGs.
Larry will also be a guest again on HPANWO Radio, see links column, in a short time after some anticipated upcoming developments.
See here for the next part: http://hpanwo-voice.blogspot.co.uk/2017/03/the-larry-warren-controversy-part-10.html.
Posted by Ben Emlyn-Jones at 17:11