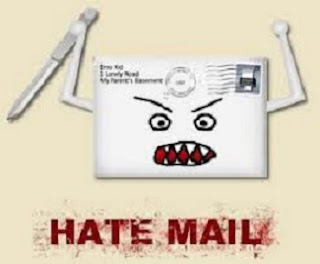 See here for essential background: http://hpanwo-voice.blogspot.co.uk/2017/02/is-larry-warren-fraud-part-7.html.
I have received the following blog comment from James Welsh, one of the inner circle of the anti-Larry cult. It can be found under the first article in this series, see: http://hpanwo-voice.blogspot.co.uk/2016/12/is-larry-warren-fraud.html. It goes:
"Anybody with half a brain cell can look at these two links and that should answer your question (about handwriting analysis. He includes some URL's). By the way, I still have not had a public or private apology from you for breaching my privacy by the untimely disclosure of my private and confidential information and publishing it online for the world to see before I got a chance to. That is the definition of breach of privacy. I do not forgive easily but an apology would be a good place to start, Ben. I tried to look out for you and you went and did what you did. If no apology is forthcoming anytime soon, I strongly recommend you loose any excess weight that you may be carrying, because when I see you, I really do hope for your sake that you are able to run."

To begin with, Welsh is lying. This is a completely unprovoked attack. As I explain in the previous post in this series, I have not breached anybody's privacy. Whenever the anti-Larry cult discusses what Larry and I did, they are always careful to omit the fact that the addresses of the recipients were blanked out and I have never had access to them. If I had I would never have published them or used them in any way to contact the recipients. The letters themselves were generic template correspondence sent from a solicitor to them, not from them. I've been reprimanded by Larry's solicitor because what I did was bad legal practice, but it did not break any laws. If Mr Welsh's conduct towards me had been more respectful then I would apologize, but I never do that to people who treat me in the manner he and his friends have. As for the handwriting analysis, I explain in the first article why I think it's a mug's game. So far we have not seen any results at all, not even the inconclusive ones that I predicted. Presumably Sacha and Alyson still have the £600 from their GoFundMe.com campaign. Are they still making arrangements or something? It's taking a rather long time. What about the last sentence in Welsh's post? Am I to interpret that as a threat of violence? In that case I would ask Mr Welsh to remember that I am capable of using, and willing to use, all the legitimate force that the law allows to defend myself and/or those close to me. I will not be running anywhere, and I would not like to see anybody getting hurt, even him.
See here for the next part: http://hpanwo-voice.blogspot.co.uk/2017/03/the-larry-warren-controversy-part-9.html.
Posted by Ben Emlyn-Jones at 18:28

I don`t understand ,these people "the anti larrys" say he wasnt there ( to witness one of the landings /incidents etc ) so if he wasnt there ,why waste time ,money & your credibility on handwriting research ?
Handwriting is academic if he was not there ..... right ?
I have witnessed some of this & simply watched it unfold,havent commented or liked or shared anything ive just watched & read ,they contradict each other so many times & one or two of them are pretty good ufologists outside of the campaign to "out" a man they maintain wasnt there ?!?! makes little sense.
I will say that larry for several months was dignified & held back from full rants at some of the rubbish hurled at him,to his credit .
RFI in itself is now a secondary story outside of attack larry attack penniston attack halt.Very few work on getting all these people in one room at the same time to try to further the objective
WHAT HAPPENED IN DECEMBER 1980 ?!

From what I understand the handwriting research has nothing to do with whether Larry was on the base at the time of the ufo stuff. The question is if Larry has a history of deceiving people. If he has then it could call his RFI account into question more than it already is. Won't prove anything either way.

I have had a keen interest in the Rendlesham case for the last 30 years and find the incident absolutely fascinating.
I don't have any gripe with Larry Warren or even know the guy, I am sure he is very nice.
But for me he has ruined the Rendlesham case, the way he talks to people is so insulting and so rude.. I don't understand why he has to pick fight's with everyone, if he stayed quiet rather than his horrible replies because he doesn't agree with something I think people would have so much respect for him, like I did in the early days. I am just saying.

Thanks for all your comments, everybody. There will be an update soon.