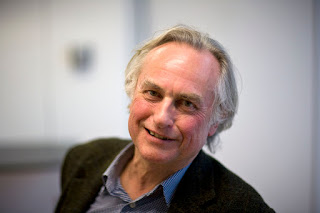 Richard Dawkins has suffered a stroke. It was very quiet and undramatic as strokes often are. He was sitting down at his home in last Friday when he suddenly found that his left arm wouldn't move properly. He tried to stand up, but fell to the ground. He managed to phone his wife in and she alerted their neighbour who called an ambulance. He was taken to my old hospital, the John Radcliffe, where he was given a scan which revealed he had had a haemorrhagic stroke in the right basal ganglion, the part of the brain that governs movement of the left side of the body. Luckily the part of his brain that Dawkins values the most, the organs of higher cognition, was unharmed. He was kept in the neuroscience ward over the weekend and was then sent home. He is expected to make a full recovery. For the time being though his manual dexterity is hampered. He has a lot of trouble with buttons which he's used to fastening with his left hand. He's even joked about going to live with the Amish people where buttons are banned for religious reasons. Unfortunately he's had to cancel his upcoming tour of and . As always, controversy has followed Dawkins even to his sick bed. The Revd Arun Arora, the Church of England's head of communications, has been criticizing for Tweeting that Christians should pray for Richard Dawkins, despite him being the world's most famous atheist. Some of Dawkins' fellow atheists interpreted the call to prayer as sarcastic and gloating. The church maintains that it was intended sincerely and I think it almost certainly was, see: http://www.dailymail.co.uk/news/article-3446628/Church-England-accused-TROLLING-stroke-hit-atheist-author-Richard-Dawkins-ask-believers-pray-him.html. Something similar happened when Christopher Hitchens first fell ill. Richard Dawkins has recorded a short podcast in which he speculates what might have caused his stroke. He has suffered from high blood pressure for a while, a known risk factor in strokes. The doctors also asked him if he's experienced any stress recently; and of course he has, as I reported myself a few days ago, see: http://hpanwo-voice.blogspot.co.uk/2016/02/richard-dawkins-banned.html. He specifically mentions the "Tweetgate" incident. He felt very distressed at being banned from appearing at NECSS. Interestingly the morning of the day his stroke happened, Dawkins received a very gracious letter from the NECSS management committee announcing that they'd changed their mind about their decision to no-platform him. They apologized and reissued their invitation. This delighted Dawkins, see: https://soundcloud.com/user-733970241. Rebecca Watson so far has expressed no remorse for her treatment of Dawkins, but released a short statement on her blog wishing him a recovery, see: http://skepchick.org/2016/02/richard-dawkins-suffers-stroke/. I can only join her in hoping Prof. Dawkins gets well soon. All the best to his wife and family too. "Social Justice Warriors" are an utterly ruthless bunch. Seeing as they are a product of cultural Marxism in all its materialistic amorality, that is to be expected. They felt no shame when they made Dr Ian Taylor weep on live TV, see: http://hpanwo-voice.blogspot.co.uk/2014/11/sexist-comet-shirt.html, nor when they banned Alison Tieman from a comic art convention, see: http://hpanwo-voice.blogspot.co.uk/2015/04/anti-feminist-women-banned.html. I don't expect Rebecca Watson to undergo an overnight conversion after her experience of internet bullying; but if she, or any other SJW, has a shred of humanity left inside them, I hope that the plight of Richard Dawkins will start them on the road to reconsideration. As for Dawkins himself; he remains as atheistically positive as he ever was. He's not about to do a Jill Bolte Taylor, see: https://www.youtube.com/watch?v=UyyjU8fzEYU.
Posted by Ben Emlyn-Jones at 18:49

Thanks Ben for today's neo-atheist daily drama! It is no surprise that his many acolytes reacted ungraciously to the V. Reverend Aurora's genuine concern. It is noteworthy that for individuals who profess, categorically, a disbelief in the next life, the typical neo-atheist continues to invest enormous mental and emotional energy (not to mention time) disavowing the existence of a non-existent God. Moreover, they attempt wholeheartedly to disabuse the rest of us from our own beliefs! This behaviour would be understandable were they selling books hand-over-fist like Rich 'Laughing all the Way to the Bank" Dawkins. But far from millionaire Oxford academics they are!

Hi Laurence. You're welcome. I'll try to have a break from skeptic-ological posts for a while. It's a sign of how much New Atheism has become a religion in itself, in form if not in literal fact.

As an early adopter of apologetics around the release of the God Delusion forum on Amazon Books, I came to the same understanding Ben, viz. the New Atheism as a new Religion. Based on this experience, I would recommend to any newcomers to this area to confine oneself to the observation of the New Atheism through the HPANWO prism.

However I commend your work, I certainly do not envy you the considerable effort involved in crystallising the events. Bravo and enjoy the well earned Skeptic sabbatical :)

I'm glad my analysis is worth it, Laurence. Thanks. I'm glad to say that nowadays I'm not alone and that the sunset of this pseudo-intellectual pop-cultural movement is coming. I particularly recommend the works of Alister McGrath who has written, among others, books with the irreverent titles of "The Dawkins Delusion" and "Dawkins' God". But really a lot of the rebuttals to Dawkins were written before the old man was even born by spiritual philosophers like CS Lewis and George Gurjieff.

I was not familiar with Gurjieff Ben, I must look him up. May I add the comparatively understated, 'Why There Almost Certainly is a God' by Keith Ward and the incomparable Teilhard de Chardin's 'The Phenomenon of Man'?. (Although I am conscious that you are likely to well aware of these already :))

Ah yes, Dawkins often refers to that book. He says that a particularly scathing critique of de Chardin's classic work caused him to lose his faith while still in his youth

New Atheism has become a religion in itself, What utter clap trap rubbish from Ben find Atheism is a non religion or belief system actually atheism lacks a belief in the supernatural or gods, as for Alister mcGrath book "The Dawkins Delusion" he calls Atheists Fundamentalists...This is very entirely wrong...Atheism is the antithesis of fundamentalism. Fundamentalism came from Christianity. But find it in other religious beliefs. As for Dawkins selling books hand-over-fist like Rich 'Laughing all the Way to the Bank" Dawkins. He was already rich....His family tree had estates in past if you look at his families history , they were slave owners but went against it in time. No one likes Alister McGraths books.

Anon, I like Alister McGrath's books. And you're wrong about atheism. Go to HPANWO TV and watch my video "Skeptics 2018".