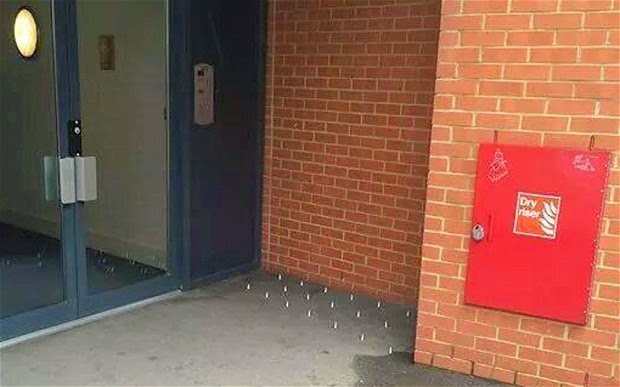 When you enter a railway station, shopping centre or other large indoor space, you'll often find that all the horizontal surfaces above the ground are covered with short spikes. This is to discourage pigeons and other birds from entering the space by giving them no place to perch. Somebody has decided to apply the same principle to the homeless. A couple of areas where people regularly sleep rough have had the ground covered by rows of spikes to make lying down there too uncomfortable. The first appeared in the doorway of a block of luxury apartments in , but others have been installed under flyovers and on low window ledges. This has caused a media scandal, see: http://www.channel4.com/news/londons-anti-homeless-spikes-criticised. The subtext is that homeless people are to be treated as a pest like pigeons. They have no place in society; they are even no longer human. I find it ironic that in his book Down and Out in Paris and London George Orwell reveals that the nickname for a homeless hostel in the 1920's was a "spike", see: http://hpanwo-tv.blogspot.co.uk/2011/10/down-and-out-in-oxford.html. With increasing poverty more and more people are losing their homes and are forced to sleep outdoors and these spikes are effectively punishing them for that. This is not the first time this kind of thing has been done. There's a park in near a place called which used to be a gathering place for homeless people, but then the council put in new benches specially designed not to be comfortable to sit on for too long. So the homeless moved elsewhere. Naturally Katie Hopkins supports the spikes... or says she does, see: http://www.closeronline.co.uk/2014/06/katie-hopkins-supports-anti-homeless-spikes-would-you-want-vermin-in-your-doorway. (I've written about Katie Hopkins before, see: http://hpanwo-voice.blogspot.co.uk/2014/04/uniforms-for-unemployed.html. The more I listen to her odious tirades the more I question her sincerity. I wonder if she's acting out a role cast for her by the media, or perhaps she's just stirring up controversy for its own sake; Christopher Hitchens without the brains!) I sometimes read The Big Issue and talk to the vendors about life on the streets. One man told me that he hates begging and wished he didn't have to do it. He says it's nice when people give him a few coins, but it's almost as nice when the decline politely. What really hurts is when they just walk past him without even looking at him, acting as if he's not there. It's dehumanizing, just like those spikes. So always reply to a beggar when they approach you, even if it's just to say "no".
Posted by Ben Emlyn-Jones at 15:05

Thank you for sharing the post. Yes it is a reflection of the dualistic mentality that can be strengthened even in times of the masses under the foot of the global commerce elite and the Capitalist system (like our growing social cult of the 'personality ego' is premised upon greed, and that this promotes selfish individuality even amongst others who are in the same boat. Maggie thatcher became the bellwether of this Global mentality when she spewed out the devisive in 1987; "I'm homeless, the government must house me.' They're casting their problem on society. And, you know, there is no such thing as society. There are individual men and women". This engendering of the Greedy self centred entity (masked as ambition was premised on the false dream of free market autonomy that would and always will operate through the narrow gates of privilage which we are meant to accept as just 'chance' wherein we are dealt the cards we have without external limited distribution which is a lie. This story reminds us that we must uproot such inner divisive hindrances of Greed, Hatred, Laziness, Anxiety and Fear which is engendered by engineered cultural relativity be it within and without our arbitrary minds. I heard an interview in which a 'working class' woman (There is no class system only an illusory psychological construct; "I feel sorry for them but I would not want them outside my apartment if I had one" this shows the manipulation of even those who are more likely to end up being homeless at some point in their lives through these very deeply rooted hindrances which has being assimilated in an ongoing culture of 'personality' over that of compassion for the group. Homelessness is the result of this systemic elitist greed of the Global Modal and of our own inner Modal subtly mirroring this very Modal. The homeless are voiceless victims of the inequality and injustice that exists within the Capitalist System, and are blamed by those who own wealth, for their own 'grief' of inconvenience for the wealth they have had to fight to get or have accumulated through privilaged social structures. We all know whatever does not make profit has no 'value' in 'real terms' but the reality is is that value equates only to the things we crave for, are attached to or cannot have and all are the product of Greed, Fear and Lack of access. On both sides this debilitating and divisive socio-economic conditions create dysfunctional psychology and abhorrent behaviour for which the poor, immigrants etc are blamed including the uncaring attitude of the 'have's'. This is just another sad reminder of the dualistic war that exists in the inverted inner thought process and the elitist agenda, let's smash both if we are to live free from Fear, Ill will, anxiety and Greed which will dissolve when we see beyond what can be seen. Thank's for a thoughtful article Ben

I can't begin to post a comment as eloquent as Xylomet's. Hat's off! I'm afraid its late and I'm tired. I would merely add,"Is this the best solution that our allegedly democratic society has to help our homeless population. Why not go the whole hog and lay bear traps instead of spikes?"

Thanks for your comments, Xylomet and Herbie. I know what you mean exactly, X. You put it very well. Those who blame the homeless are blaming something else, that they all know about but can't name.

Great comments guy's. There is no difference between us however we express ourselves, all are valid and all come from the same underlying essence. This is something forgotton by the system that promotes the opposite.

It does so deliberately, X. It's a conspiracy against the human spirit