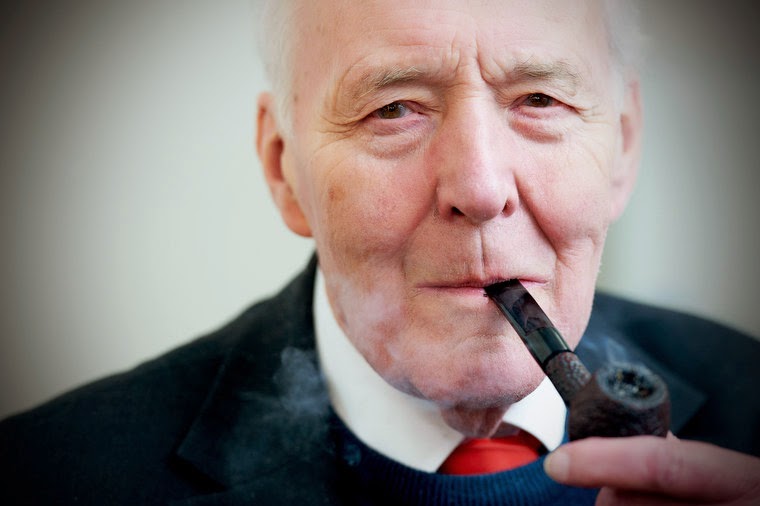 Rt. Hon. Tony Benn MP
- 14th of March 2014
I'm sorry to report that Tony Benn has died; Neon Nettle, the magazine I've written for, has done a moving tribute to him, including some of his favourite quotes, see: http://neonnettle.com/feed/39-ten-genius-quotes-from-tony-benn. As regular HPANWO-readers will know, I generally have a very low opinion of politicians; therefore one like Tony Benn stands out like a jewel in a dung heap. He was a man with principles who was in politics because he believed in doing good deeds. He never sought status and fortune, and he only accepted power as a means to a noble ends. He refused to join the House of Lords even when he could have done, and when he was a minister in the Labour governments of the 1970's he exposed the sham of the bombing of 1945. He wanted to change the world into a fairer and more just one and he never lost sight of that ideal; and he used his writing and oratory skills to do that. He was always an optimist, a "gentleman socialist", and he went to his grave proud of his achievements. At the time he was in office, left-wing ideas were seen as very anti-authoritarian because we had a hard right-wing government under Margaret Thatcher. As time has gone on I've come to realize that the left in politics is used as much as the right to further and deepen New World Order authoritarianism, but I know Tony Benn was never a "New Labour" man, and even if I disagreed with him on some issues I felt he had a good heart and a backbone to match. It feels like the end of an era when that older generation of statesmen die and we're left with their corrupt and careerist modern successors like David Cameron and Ed Miliband: pro-EU, Bilderbergers, always ready to plunge us into war. ! Rest in peace, Tony Benn. Condolences to your loved ones; and they number in millions.
Posted by Ben Emlyn-Jones at 21:42

No disrespect to the dead intended here and once i was blind but now i can see. Anthony Wedgewood Benn was a charlatan, a member of the Committee of 300 (see Coleman's book for further details), an MI5 operative and played a similar role as a gatekeeper of the "Left" just like that other shill Chomsky does now. Benn clearly reveled in his avuncular role as controlled opposition and i enjoyed many of diary insights but he really is not the man you think he is ( would be nice if he actually was) but there you go

If that's the case then it's a pity. I read John Coleman's book and don't recall his name, but if it's sop it's so.

Tony Benn
British Politician
Anthony Neil Wedgwood Benn was a British Labour politician who was a Member of Parliament for 47 years between 1950 and 2001 and a Cabinet minister under Harold Wilson and James Callaghan in the 1960s and 1970s. Wikipedia

HERITAGE FOUNDATION Founded by brewery magnate Joseph Coors to act as a
conservative think tank, Heritage was soon taken over by Fabianists Sir Peter Vickers
Hall, Stuart Butler, Steven Ayzlei, Robert Moss and Frederich Von Hayek under the
direction of the Club of Rome. This institute played a major role in carrying out British
Labour leader Anthony Wedgewood Benn's order to "Thatcherize Reagan." Heritage is
certainly not a conservative operation although at times it may look and sound like one.

The Committee of 300 through its many affiliated organizations was able to nullify the
Reagan presidency. Here is what Stuart Butler of the Heritage Foundation had to say on
the subject "The right thought it had won in 1980 but in fact it have lost." What Butler
was referring to was the situation in which the Right found itself when it realized that
every single position of importance in the Reagan administration was filled by Fabianist
appointees recommended by the Heritage Foundation.

Butler went on to say that Heritage would use rightwing ideas to impose leftwing radical principles upon the United States,
the same radical ideas which Sir Peter Vickers Hall, top Fabianist in the U.S. and the
number one man at Heritage, had been openly discussing during the election year.
Sir Peter Vickers Hall remained an active Fabianist even though he was running a
conservative "think tank." As a member of the British oligarchical Vickers armament
manufacturing family, he had position and power.

The Vickers family supplied both sidesin the First World War and again during Hitler's rise to power.
Vickers' official cover was the University of California's Urban and Regional Development Institute. He was a
longtime confidant of British Labour leader and Committee of 300 member Anthony
Wedgewood Benn.

Both Vickers and Benn are integrated with the Tavistock Institute for Human Relations,
the premiere brainwashing institution in the world. Vickers uses his Tavistock training to
very good effect when speech-making. Consider the following example:

"There are two Americas. One is the nineteenth century heavy-industry based society.
The other is the growing post industrial society, in some cases built on the shards of the
old America. It is the crisis between these two worlds which will produce the economic
and social catastrophe of the next decade. The two worlds are in fundamental opposition,
they cannot co- exist.

In the end the post industrial world must crush and obliterate the
other one." Remember, this speech was made in 1981 and we can see from the state of
our economy and our industries just how accurate was Sir Peter's prediction. When
concerned people ask me how long the 1991 recession will last, I refer them to Sir Peter's
statements and add my own opinion that it will not end until 1995/1996, and even then
what emerges will not be the America we knew in the 1960's and 1970's. That America
has already been destroyed.

It was Sir Peter's protege, Stuart Butler, who gave President Reagan 3000 pages of
"recommendations," which no doubt contained some opinions expressed by Anthony
Wedgewood Benn, a member of parliament and a ranking member of the Committee of
300. Benn told members of the Socialist Internaional who met in Washington on
December 8, 1980: "You can thrive under Volcker's credit collapse if you profile Reagan
to intensify the credit collapse."

That Butler's advice was taken and applied to the Reagan administration can be seen in
the collapse of the Savings and loan and banking industries which accelerated under
Reagan economic policies. While Benn called it "profiling," he really meant that Reagan
should be brainwashed. It is worth noting that Von Hayek-who is a founder member of
Heritage-used his student, Milton Friedman, to preside over the Club of Rome's plans to
deindustrialise America using the Reagan presidency to accelerate the collapse of first the
steel industry, and then the auto and housing industries, for example.

And this from Coleman's "The Club of Rome":

It was Anthony Wedgewood-Benn, a very prominent Labor
leader in Britain who insisted on the retention of Volcker,
notwithstanding Reagan's campaign promises to rid America of
22 Dr. John Coleman
the Volcker scourge. Benn felt that Volcker was the best man to
bring "class war" to America. Benn nominated Rifkin to assist
Volcker in this endeavor, which he said, "will polarize the
Americans." The COR adopted a plan to destabilize currency
through higher, and constantly fluctuating interest rates.
They wanted to get rid of Helmut Schmidt, then Chancellor of
Germany, because he had been instrumental in stabilizing
international interest rates. Sir Peter Vickers Hall called for
interest rates in the United States to be hiked to 20 percent, as
the best way to end capital investments in industry. Volcker was
careful not to show his face at the COR meeting, but it is
believed that he was briefed by Hall of the Heritage Foundation.
Stuart Butler, who was chief executive officer at Heritage, had
this to say to the COR delegates:
In the Reagan administration we have a right-wing
government that will impose some radical left-wing ideas.
There is no reason why Communists, anarchists, libertarians
or religious sects (he was talking about Satanism, Voodoo,
Black Magic, witchcraft etc.) should not put their
philosophies forward.
Butler suggested the old Socialist doctrine of "free enterprise
zones" be pushed onto the Reagan administration. Free
enterprise zones are found in places like Manila and Hong
Kong, not to mention Mainland China. They are literally, "slave
shops."
Butler called for free enterprise zones to be established in areas
where industries had been uprooted and destroyed. Butler
envisaged silent steel mills, shuttered machine tool factories and
closed shipyards.
Cottage-type "industries" so common in Hong Kong would be a
suitable means of employment for displaced persons from
depopulated cities, according to the Post Industrial Zero Growth
plan.