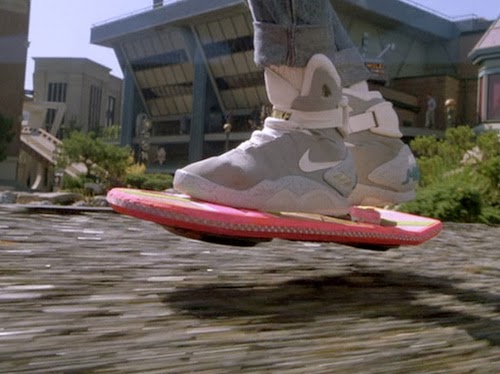 A website is doing the rounds at the moment about the launch of a new invention, called the HUVr Board, pronounced "hover board"; it resembles a skateboard and is intended to be used in a similar way, except it has no wheels. It levitates above the ground between heights of a few inches to about a dozen feet. Experienced skateboard-users can easily adapt to it and perform many of the same activities they're familiar with, but without touching the ground at any time and with no visible means of support or propulsion, see: http://huvrtech.com/. This device is very similar to the fictional one portrayed in the 1989 Robert Zemekis film Back to the Future Part II and this promotional video features the actor Christopher Lloyd who starred in that movie, see: http://www.youtube.com/watch?v=A4vE_vpkr90. According to their official site the project to invent the HUVr Board began in 2010 and involved the development of antigravity through electromagnetism and materials science. There is a group photo of young and academic-looking people who are allegedly the team behind this creation. It has been endorsed by a number of businessmen, celebrities and Tony Hawk, a professional competitive skateboarder. They claim that the HUVr Board is going to "change the world!" The official site is fairly small with only two main pages and the YouTube channel only has two uploads. There is a very small amount of basic information about how the apparatus works, which is surprising seeing as the team emerged out of the prestigious Massachusetts Institute of Technology, which is the engineering equivalent of , and were associated with a very real battery design project, see: http://dmse.mit.edu/faculty/profile/chiang. The circular structures underneath the footplate are made of titanium, a very strong and durable metal often used in medicine, industry and mechanics, and that it's connected to something called a "mag-force charger" that generates a magnetic field. The leader of the team says: "This board has more technology in it than the satellites we send into space!" but does not elaborate. You can't buy a HUVr Board yet, but you can choose what colour you want your eventual order to be; and you can fit handlebars as optional, turning it into a kind of "hover scooter". You can also download a smartphone app for a virtual version of the device.

My first thought was that this is a hoax, and this news article thinks so too, see: http://www.ibtimes.co.uk/huvr-board-hoverboard-back-future-becomes-reality-according-new-video-1438922. If so then so far there have been no confessions, and also what could the motivation be? If it were some kind of viral marketing scam then I'd be more inclined to dismiss it, unless these people simply enjoy taking the Michael. Despite the very sparse explanation of the HUVr Board's function, the idea of electromagnetic forces triggering antigravity or free energy is a sound one. This has been the principle behind several machines, including one I saw demonstrated live at the Probe Conference in 2006 by Richard and Stan Conway; it resembles this machine: https://www.youtube.com/watch?v=3QTzxah6fOI. The same basic principle is also behind John Searl's eponymous Searl Effect Generator, see: https://www.youtube.com/watch?v=pK4-iGZoQ_s. There are rumours that several publicly declassified aircraft, like the B2 Spirit bomber, still secretly employ this breakthrough. As I've said many time, I think there's a deliberate cover-up of this technology, for example see: http://hpanwo-tv.blogspot.co.uk/2013/05/ben-emlyn-jones-live-at-truth-juice-hull.html. If the HUVr Board is real then it's possible a false hoax was constructed retrospectively, including incredulous scientific pronouncements, a celebrity cast and other sensational gimmicks. Then again the whole HUVr Board story could be a hoax, but one intended to confuse and mislead the viewer from a different but real story emerging in parallel, like this one perhaps, see: http://www.ufoevidence.org/documents/doc1064.htm. Or is this a psychological experiment coming out of the Tavistock Institute or Rand Corporation to gauge the public's reaction to the concept of free energy and antigravity? We shall have to see how this story develops, but one thing I've learnt from my studies of the media is that when you open a newspaper and a really melodramatic scoop jumps out at you on page one, flick through to page twelve and scan the small columns very carefully indeed!
Posted by Ben Emlyn-Jones at 12:04

Update on the Hoverboard situation: There has been a confession released, a video once again featuring Back to the Future Part II actor Christopher Lloyd. It seems that is was a hoax by a media entertainment group called "Funny or Die", see: http://msn.foxsports.com/southwest/story/t-o-fooled-us-hoverboards-aren-t-real-030514

The confession video is also intended to be funny in a bittersweet way, Lloyd performing with exaggerated emotion. The most interesting part is where he appeals to the audience: "This (the hoverboard) belongs to the people! Not in some dusty old storage unit!... because if we inspired one person to get into the 'hover sciences' I consider that a victory! Here's to hoverboards being actually real some day. Go! Do it! Make it happen! For all of us!" Does Lloyd know how serious what he said actually is? If he had substituted "free energy", "The Hutchison Effect" or "cold fusion" for "hoverboards"... that gives me a chill! I don't think this confession video negates anything I said in the article; I doubted very much if it was real from the start. The idea that this is a muddle-up or some kind of psychological test is still a possibility.