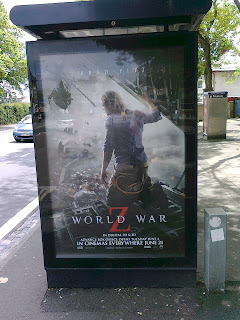 I was walking to work today, as I do regularly, and I kept passing poster adverts for a film called World War Z; at least three of them, I swear. In the end I decided to photograph it, see above. I guessed from the title and picture that this is some kind of zombie apocalypse horror movie. There have been many of these in the last few years, including the welcome return of George Romero to continue his outstanding Dead series, Land of the Dead, Diary of the Dead and Survival of the Dead. Along with classic horrors, there have been several zombie movies with a sci-fi element like Resident Evil: Retribution and I am Legend. The scenario usually involves some kind of infectious disease causing people to become zombies, as opposed to the supernatural or otherwise unexplained reanimation of corpses, the Romeroesque zombie. Based on the trailer and literature package World War Z appears to be one of the former, see: http://www.worldwarzmovie.com/. Based on how I was seeing advertising for it everywhere, I wondered if it were directed by Roland Emmerich, but was pleased to see that it is not; it's by somebody called Marc Forster. It therefore may well be worth watching. There are two elements that concern me here; the first is the sheer number of films coming out at the moment involving some kind of massive regional or global disaster or apocalypse, the destruction of human society and/or planet Earth. Good examples are Oblivion, see: https://www.youtube.com/watch?v=HQ0iiqyJ7BU and Olympus has Fallen, see: http://www.youtube.com/watch?v=ar-IaAx7s8k. (The visual concept of the White House disintegrating and exploding has featured in several films before.) Both these movies came out this year. I know this is not a new idea, but I do feel a certain meme is being planted in the mass psyche of mankind, certainly in Euro-American society. There's an undercurrent of dread and pessimism, a feeling that we're on the brink of entering a living nightmare of one kind or another. Some might say that this undercurrent has inspired these films to be produced... but is it perhaps the other way round?

The other worrying factor involved here is the zombie theme of World War Z which is another meme that is becoming more and more common. Not only have we seen the return of George Romero after being off the scene for twenty years, but a large increase in other film-makers taking on this recurring plot. I don't think it would bother me so much if I hadn't come across some information concerning the possibility of real zombies! See here for more details: http://hpanwo-radio.blogspot.co.uk/2013/03/programme-35-podcast-zombie-special.html and: http://hpanwo-tv.blogspot.co.uk/2012/03/real-zombies_23.html. What's going on? Is World War Z another part of this promotion of the idea that zombies are real and about to get us? Is it more a metaphorical allegory, as some people have already suggested to me, that the zombies are a representation of Muslims, illegal immigrants or the unemployed? Then again, it could all just be a huge coincidence. A producer just woke up one morning and thought: "Bingo" I've got a great idea for a new movie."

Not seen that, Joe. Thanks for letting us know.

Ben, trust me, that zombies never really disappeared off radar - only for main USA studios producing blockbusters, not for fans of B-class underground movies. That is one thing. It is just that original concept of "Day of the dead", when Romero wanted to do something which finally we could see now in WWZ: epic, over-30-mln dollar zombie apocalypse - his concept has been tamed and blocked by producers back in 1985, so it all (literary) went underground :) still, you've got memorable scene of self-sacrificing Muslim there, so all this concepts with "zombie as metaphor" were already used. His new trilogy is quite poor, in my opinion, more like cashing of his past' fame - apart from "eat the rich" in "Land of the dead" :). According to some sources, first script of WWZ gave impression of first Oscar - nominated zombie movie. Well, it didn't really worked out this way...As you have mentioned "Olympus..." - three MONTHS after it's premiere, we've got "White House Down", which almost copies it's ideas. And, yes, yours truly favorite Roland Emmerich directed it :D plus, in September, they will be a premiere of TV series entitled "Hostages" - again, US government and president as targets! They seem to shit their pants, or suggesting another plot? Time will tell.