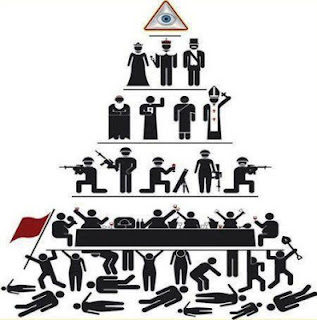 A week has gone by since the Bilderberg Group Fringe Festival, see here for my HPANWO TV reportage: http://hpanwo-tv.blogspot.co.uk/2013/06/bilderberg-2013.html. Have there been any aftershocks from the amazing outcry against the secret meeting in last week? Yes, both good and bad. Sadly the BBC set up Alex Jones to play the clown on The Politics Show, see: http://www.youtube.com/watch?v=xgBq6q4x8Fw. Poor Alex has never been on the BBC before and doesn't understand how devious they are; they're so different to American TV. On the plus side Michael Meacher MP, who spoke at Fringe, grilled Kenneth Clarke in the House of Commons, see: http://www.youtube.com/watch?v=6dqi3On6x4I. Clarke gave the textbook response that Bilderbergers have always done since they were first compelled to comment at all, just a few years ago: "It's just an informal, private talking-shop with no legislative powers at all." However if you try to get the minutes of their meetings disclosed under the Freedom of Information Act you will be told they're exempt due to reasons of national security!

On a personal note, I must say it was one of the happiest and most remarkable weekends of my life. I got to meet lots of friends I'd only ever known before on the Internet as well as make some new ones and meet up with some existing ones again. I was especially happy to finally meet up with Jackie Noise, see below, whose home I stayed at; thanks, Jackie! During the open-mic session before the main speakers came on I made a speech, see: http://www.youtube.com/watch?v=i6uXzpT8zSg (thanks to my YouTube friend Badriyah43 for filming this.) On Friday night we had a remarkable UFO sighting that defies all attempts at explanation, filmed by Jackie just a few miles from the Bilderberg venue, see: http://www.youtube.com/watch?v=6zA_I7lxqBU. There were a large number of strange objects all over the sky; the strangest group consisted of about three luminosities near the zenith which traveled in various directions.
Posted by Ben Emlyn-Jones at 20:04

Ben a funny thing post Bilderburg, the US warmongers played the "chemical weapons used by the Syrian government" card. No coincidence there then!

I bet that's what they were talking about up at that hotel.