What Class are YOU? 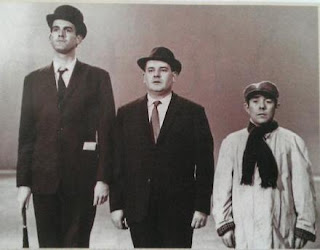 Answer the question! You do not have the right to opt out!

The BBC have created this survey (You'll need to register for a BBC ID, but this is easy and free): https://ssl.bbc.co.uk/labuk/experiments/class/

As if we haven't been divided-and-ruled enough through creed, colour, gender and religion etc, our rulers have seen fit to categorize us into "socio-economic classes", and constantly remind us of how much we should identify with our place in this class structure and how little in common we have with those in other places within it. The class system is something emphasized and fixated upon by all political and cultural stripes. For Marxists and socialists on the Far Left it's the fulcrum of the entire human world; they see it as something that defines all of human history, and that it has to be abolished by a revolution and replaced with a classless communist utopia. For the aristocracy it is a product of breeding and tradition that has to be preserved and defended to maintain social order... as well as their own privileges of course. Whether the class system is something natural or whether it is an artificial construct is something I'll come on to later; but whether it is or is not, the way the authorities try to socially engineer us is something I find very distasteful and worrying. In the modern world there are now seven discernible classes apparently, when there were originally three. Here's a BBC Radio interview about it: http://www.bbc.co.uk/news/uk-22012935

I must concede that I am what would conventionally be known as "working class", but I really hate being thought of as a class. I never identify being in a class and I strenuously avoid thinking of others in those terms. Therefore I filled in the survey hoping I could make the BBC computer go phut! like a Star Trek robot. The survey begins by asking what kind of neighbourhood you live in, what kind of holidays you have, about when you eat out and your musical tastes. Then it asks about the education and the professions of yourself and the kinds of people you know. Then they ask you about the kinds of newspapers you read. Luckily they never said "buy" because I never buy any newspapers and never have. They also ask many questions that make me think Common Purpose have their grubby finger-marks all over the survey; for instance they ask whether "people can be trusted". At the end of the survey I got presented with a huge data readout describing exactly where I strand financially and socially. Then it told me about another aspect of myself using a very Orwellian and sinister word: "social capital"! Yuck! Apparently I have a lot of it, but it's almost all through t'Internet! My social life was so ingrained into my hospital that when I was kicked out of it I lost everything. I still keep up with a few of my old Bro Po's now and again though. I have a lot of "cultural capital" despite my being officially "working class"; because I'm very much an amateur intellectual and like reading books etc. They've even given me a novelty coat-of-arms, and you'll get yours too if you complete the survey.

Maybe it's because of the recent implementation of the Welfare Reform Act that this subject is topical. Because this move by the Government will increase the "precariat" many-fold; there's even talk of a New Dark Age, thanks to Iain Duncan Smith and his determination to suck the poor for every penny he can get while tiptoeing around the bankers whispering with incredible care in case they think he's begging for a single penny! Am I sounding like a Marxist who thinks class has to be destroyed? Well, no I'm not. Despite what I said above about not wanting to be identified as a class I don't reject the concept as a whole. I don't believe "universal equality" is possible, and if it were possible it wouldn't be healthy. In fact the futile and deceptive quest for "universal equality" has been used as a Trojan horse for a lot of the increasing authoritarian and Conformist aspects to politics and culture that I'm always complaining about on HPANWO. Somebody once said to me in a "Charles"-like way (see: http://hpanwo-tv.blogspot.co.uk/2011/03/charles-doing-washing-up.html): "There will always be rich and poor, Ben. That's natural; it's just the way things are." I don't agree at all; I think there will always be rich and "less rich", but poverty is a product of contrived scarcity and is completely avoidable. However rich and "less rich" is natural. In the same way that people of different creeds and colours are different from each other, so are people within a single social group. I think some kind of natural hierarchy will emerge in the post-Illuminati world; there would be an upper-caste of political leaders or industrial directors and the "rest of us" which will comprise of an entirely new kind of social class consisting of people in all kinds of occupations earning a wide scale of income and owning comparatively diverging amounts of property. But, I repeat, there's no reason a single person should be poor anywhere in the world. We may not all be born equal, but we are all equally valuable; we all have the same worth as human beings. What we have in today's world is a very unnatural hierarchy that is the source of the power on Earth for a tiny elite few that are so far up that class ladder that they are beyond it. They hover above it in the clouds of secrecy; the rest of us can't even see them. They are the invisible, detached capstone hovering above the rest of the pyramid, controlling us all, from "precariat" to aristocrat.

I took the quiz and it was very short. No asking what newspapers I read or where I lived just about money, what occupations of people I associate with and leisure activities. The 'elite' they refer to should be renamed the sub-elite as it represents 6% of the population. The elite represents much less than that.

That's right, Lemsip. It's misleading in the extreme. There are far fewer than that number. In the 6% they are "cattle" mostly like the rest of us.

I took the survey and it asked all the questions you mentioned, Ben. I am in the US so I just messed up their data, sorry :) One funny observation, on the part where it asked where I live and gave all those pictures of homes - they literally all looked the same to me! I had to read the descriptions to guess what came closest to where I live. In the US, housing is much more diverse than that. In general, I agree with what you have said about poverty and how unnecessary it is. However, I will point out that in the US class is completely denied. No one wants to admit that we have a class system here also (George Bush was a guy you could have a beer with!). Everyone thinks that if a kid just works hard enough she can become one of the Kardashians or something. It is important to be aware that class exists, because it does.

Cheryl Ann, the Govt has just ordered all of us Precariats to declare war on the Emerging Service Workers LOL