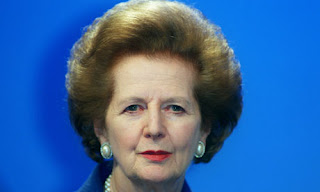 
The former Prime Minister, the only woman to be elected to the post and one of the longest serving in history, has died aged 87 after a long period of illness. She was born into a family of grocers in Grantham, on the same day as me, the 13th of October; albeit a couple of years earlier. She was became Prime Minister on the 4th of May 1979 and remained in the post until the 22nd of November 1990. The response to her death has been unprecedented, with all the front pages cleared, and there has been enormous reaction from the British people and others around the world. It has resulted in tributes from her political allies but also, a unique situation, street parties celebrating her passing. Several city centres, especially in and northern , have filled up with people laughing and cheering, some were singing songs. This one from The Wizard of Oz musical seems especially popular right now: https://www.youtube.com/watch?v=9Jn8K8EA7-Q. Forgive me, but I couldn't keep it out of my head myself! One woman had been keeping a bottle of in her fridge for years in preparation for this day. Just see the difference in public outcry between Thatcher's death and that of Hugo Chavez a few weeks before. I'd like to say to those people making merry over Mrs Thatcher's death, if you think you can do a better job than her, then shut up and try it yourself! See: http://www.eventtr.co.uk/public_relations_course_distance_learning.php?gclid=COL7-KShvbYCFRDKtAodvDgAtQ... Sorry, you have to be a regular HPANWO-reader to get that joke!

Seriously: twenty years ago I'd probably have been joining in with the celebrations. I had to witness the NHS reforms of her government personally, from the inside. They did enormous harm to the Health Service, harm that has never healed; in fact it has worsened. Public services that benefited everybody and were widely-loved British institutions have been decimated. Her philosophy of Thatcherism has changed this country in almost every way; a lot of the widely-believed myths concerning unemployment come from her government and the supporters she had in the media, see: https://www.youtube.com/watch?v=NRYEmGZDs1g. She decided that one of her political goals was to "take on the unions!" Having been involved in trade unionism myself I can sympathize with her there. However the way she chose to curtail trade unions was a strange one; she would wipe out the industries in which they operated. This she did with ruthless efficiency and the result was the chronic economic death of entire communities in the traditional mining and manufacturing heartland of the . As I said in my film, Friekraft, see: http://www.youtube.com/watch?v=GtjY166ErTg, the local power station near is fuelled by coal that comes all the way from because there are not enough mines working in to serve it any more. I wonder if her real political goal was actually the destruction of those industries; the unions were the excuse... but did she know it? In a way I feel more well-disposed towards Thatcher than I do to some of her living successors. You knew where you stood with her; she was refreshingly honest for a politician. She represented big business and corporatism and she was loyal to those she represented. Unlike Tony Blair who is a political chameleon, the invisible man, a thespian statesman. I think Thatcher actually believed her own fairy tales. When she said that she was going to liberate the out of a sense of compassion, patriotism and human rights, she was being genuinely sincere. I doubt if she had any clue about the very obvious falsehood contained in that statement, see here for more details: http://hpanwo-voice.blogspot.co.uk/2013/03/the-knobheads-of-war.html. A Russian journalist christened her "Железная Леди"- The Iron Lady, and she adopted it personally. I think in her later years her naivete led to megalomania, a sense of omnipotence and invulnerability. She brought in the Poll Tax, a policy so manifestly unjust and so extremely unpopular that it almost generated a new civil war (a poll tax contributed to the original English Civil War in the 17th Century). Then when she stood up to Europe, the only thing she ever did that I truly admire her for, it became clear that the Iron Lady was nothing more than a Paper Dolly; she was removed from office by her own party in what was effectively a bloodless coup. She was no longer useful to what journalist Alan Watkins called "The Men in Grey Suits", so they disposed of her with terrifying ease. They will do the same to any of the other supposed "world leaders", and the "most powerful men in the world", if they put one foot wrong. Margaret Thatcher lived to the ripe old age of 87, but she only did so because she was not American and was careful to avoid driving past any school book depositories.