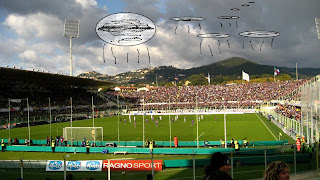 Several people have brought to my attention a brand new and highly significant UFO report. When I say "brand new" I don't mean it's about a recent incident, I mean it's just recently been reported in the main UFO literature. As per usual the recurring scourge of UFOlogy has raised its ugly head again: a long time passing between an incident and when that incident is first reported. (See: http://hpanwo.blogspot.co.uk/2012/04/pre-roswell-roswells.html) The event in question took place on in . It involved a mass sighting above the famous Stadio Artemio Franchi. The picture above is my own artist's impression of what took place based on the witnesses' statements. Of course I use the word "artist" in its broadest possible sense, I know I'm no Alex Grey; but it should give you a rough idea of what it was like for the people there at the time. The ground is the home of ACF Fiorentina and nowadays it doubles up as a ground for 's national team.

1954 was a big year for UFO's and there was a European flap in progress; in fact there were further reported sightings around and the rest of . At the world famous Stadio Artemio Franchi in a midweek reserve match was underway between Fiorentina and a neighbouring rival club, Pistoiese. It was a bright autumnal afternoon, a much more frequent occurrence in than ; however what took place during the game was an extreme rarity in both countries. A cluster of unidentified flying objects moved in quickly and then stopped and hovered above the stadium. They were described as both ovoid, egg-shaped, and cigar shaped; these are common features related about UFO's. The players, referees and all ten thousand spectators in the crowd fell silent and gaped at the spectacle; it must have been an incredible moment. There are multiple witnesses including the president of Fiorentina's official fan club and the famous Fiorentina legend Ardico Magnini, the fifth most capped player in Italian history and star of the World Cup that same year. Other players from the away team have backed up his testimony. This is an extremely significant story. We have multiple reports from different people including celebrities like Magnini, who would have an awful lot to lose and nothing to gain by making up something like this. I wonder if there were any other witnesses from outside the ground. is a big city with one and a half million residents, about the same size as which was the scene of another major urban sighting in 1997. The next step would be to check newspaper archives. Here's a major Florentine newspaper: http://www.lanazione.it/ I'll have a look through their online archives using Google Translate. But I can't speak Italian and for older archives it might be necessary to speak the language and also visit the local offices. I'll let you know if I find anything out. There were some reconstructed TV news spots that came out later. Sadly there are no known genuine photographs or footage of this event. If it had happened today then I suppose millions would have seen it. Television was around in in those days but still most football matches were not televised at the time. I'm glad to say that this story was covered by BBC Sport: http://www.bbc.co.uk/sport/0/football/20917594 and: http://downloads.bbc.co.uk/podcasts/worldservice/wswf/wswf_20130104-1400b.mp3 According to the local Florentine UFOlogist interviewed in the radio show linked, the sighting was accompanied by strange precipitation falling from the sky; what has become known as "Angel Hair"; this is a highly unusual addition to the tale that was not present in contemporary popular UFO belief and lends more credence to the case in my view.
Posted by Ben Emlyn-Jones at 16:47