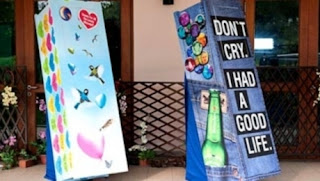 As regular HPANWO-readers will know, the mother of a friend of mine died just before Christmas, see: http://hpanwo-voice.blogspot.co.uk/2013/01/death-duty.html. Along with shuffling all the paperwork that I described in that background article, she had to organize the funeral. In doing so both she and I learned a lot about this subject. Funerals nowadays can come in many shapes, sizes and styles. The traditional funeral: varnished wooden coffin, hymns in church, the vicar giving a eulogy, is no longer obligatory. To begin with, not everybody wants to have a funeral in church because fewer people are Christians today than at any other time in British history. We have more people of other faiths than ever before and also more atheists. In fact in the last census, a full quarter of the , including a third of people in , described themselves as having no religion, see: http://poddelusion.co.uk/blog/2012/12/14/episode-166-14th-december-2012/. These people have become more organized and collective in recent years; the British Humanist Association and similar groups have grown in popularity. They regularly hold conferences and have a dedicated and sophisticated media, like The Pod Delusion radio show I link to above. These people don't wish to have religious funerals and demand, quite rightly, that they be allowed to end their lives in line with the same principles by which they lived them; therefore it is possible to have a Humanist funeral. Many people have had them including the famous TV cook Keith Floyd, see: http://www.youtube.com/watch?v=GI2TU81e7xM (Not all this video is specifically about Humanistic ceremonies so you may need to flick around a bit). My friend, whom I'll call "Shelley", and I considered this option for her mother because her mother, whom I'll call "Jenny", was not religious, however we rejected that idea. The core facet of Humanist funerals, as you'll see if you watch the link above, is the fundamental belief that there is no form of Afterlife and that when you die that, as they say, is that. (This led the BHA to win the Materialist Bravery Award in 2011, see: http://www.youtube.com/watch?v=k1Y3-BZgulA). Humanist funerals are really aimed at resolute Atheo-Skeptico-Materialists who think that the departed person has completely ceased to exist forever. Jenny did believe in an Afterlife, in fact in her youth she was a regular visitor at Spiritualist churches and here own mother had been a psychic medium. Shelley did some research into having a Spiritualist funeral, but she came up with some unexpected and disappointing results. She began by contacting the Spiritualist National Union, see: http://www.snu.org.uk/, and they gave her some phone numbers to call. These were surprisingly unhelpful; the Spiritualists who dealt with funerals were evasive and off-putting about the whole idea. The undertakers also seemed very nonplussed, phoning several numbers in the local area and receiving no replies. Shelley went to her local Spiritualist church and asked around. It appears that although it is possible to organize a Spiritualist funeral it seems to be a rare occurrence. This means nearly all Spiritualists, even though Spiritualism is officially registered as a specific religion, opt to have conventional funerals in ordinary churches. The style of a Spiritualist funeral is also very regimented, which may be what dissuades so many. They can only be conducted by a SNU-accredited minister who must be a member of the SNU for at least ten years; clairvoyance of any kind during a funeral is strictly prohibited. In the end Shelley abandoned that idea too.

This taught us something very interesting about the concept of death in our society. It's a strictly either-or situation. Either it's the full church works, or a Humanist no-Life After Death at all job. And this binary attitude is present in far more than just funerals. Just read this news article on people who are "spiritual but not religious", see: http://www.bbc.co.uk/news/magazine-20888141. The most interesting and amusing part of this article is the comment by Andrew Copson of the BHA. You can almost see the smoke coming out of his ears and the words "Does not compute!... Does not compute!..." metallically issuing from his mouth like a Star Trek robot. And it's true, spiritual-but-not-religious-nor-atheist people exist completely outside the spectrum of beliefs that is commonly accepted as existent in our culture and society. This was my biggest criticism of Richard Dawkins' The God Delusion, see: http://hpanwo.blogspot.co.uk/2008/04/god-delusion-by-richard-dawkins.html. Dawkins is effectively saying: "I've shown organized religions to be false, therefore there is no God and nothing spiritual; and Atheo-Skeptico-Materialism is therefore correct." But spiritual-but-not-religious-nor-atheist is what I am! This is what Shelley is and Jenny was too. This left us in a bit of an impasse. Then I recalled a conversation I'd had with my good friend Ellis Taylor when I met up with him; synchronisticly this was just three days before Jenny's death. Ellis Taylor is a spiritual researcher and numerologist and his website can be found in the links column of the main HPANWO site. He told me how he had acted as an officiant for the funeral of a friend of his; this was a spiritual-but-not-religious-nor-atheist person who wanted to be dispatched accordingly. We immediately contacted him and asked him if he'd do the same for Jenny. It would be a simple service compared to Ellis' friend, in which several hundred people turned up; we were expecting about seven. Also his expenses would be paid out with the general funeral bill; after all he's doing a job, playing the role that a Christian minister would perform in a religious service. We were delighted when he agreed. Another thing we thought Jenny would like was an alternative to the traditional coffin. We chose a casket from this company, see: http://www.colourfulcoffins.com/. It was made of cardboard instead of wood, which is very environmentally friendly because it doesn't require cutting down trees. It's also good for burials because it dissolves almost immediately allowing the body to decompose naturally in the soil. However it was very sturdy and looked shiny, not like a normal cardboard box at all. It was outwardly indistinguishable from a conventional coffin. The producers decorated the casket with colourful pictures of jewels interspersed with photoes of Jenny and her family which Shelley chose and sent to them. The result was affectionately designed and very respectful. All the ingredients were there for a truly nonConformist funeral.

The funeral was held at a crematorium chapel in the centre of a huge necropolis in the south of . The weather was cold and dirty, uneven two-day-old snow was piled on the ground. We were driven in a normal cortege from Shelley's home, the hearse in front and ourselves behind in a black limousine. Jenny had expressed only two specific instructions for her funeral. She wanted no flowers, saying that "flowers are for the living". She also stipulated that nobody must wear black. I'm not sure exactly why she chose that; it goes contrary to funereal traditions, but it could be because black is often a very gloomy colour and she didn't wish to have a gloomy send-off. She had her wish. The chapel was an ancient stone building which smelled nice, as old churches tend to. There were about a dozen rows of pews, but we only needed two of them; Jenny had a mere handful of living relatives and nearly all of them were there. Ellis began the service by calling up on the "Great Spirit" to hold us all in its loving embrace. We all paused for a moment's meditation to allow her soul to commune with ours. Ellis then said a few words about Jenny, telling us the original meaning of her name and giving us a brief outline of her life. After that Shelley read out a poem she had written specially for the occasion and I then read the lovely poem by Charles Henry Brent called The Ship which is a perfect illustration of how we see the dying process. After that we all paid our last respects to Jenny and walked informally out of the chapel.

It was a deeply moving ceremony that only took about twenty minutes but we'll never forget it. I'm eternally grateful to Ellis for offering his services as officiant. Perhaps in years to come along with the paperwork of dying being greatly simplified or even eliminated, as I said in the previous article, more and more people will want to have spiritual-but-not-religious-nor-atheist funerals like the one Jenny has had. Two major factors will be the exposure of the corrupt and cruel nature of organized religious institutions like the and Church of England; coupled with more open-minded research, not to mention declassification, of the existence of an Afterlife. Obviously I hope my own funeral will not be taking place for a long time to come, but as I said to Ellis the day I met him just before Jenny died: "If I go before you, you can do mine."