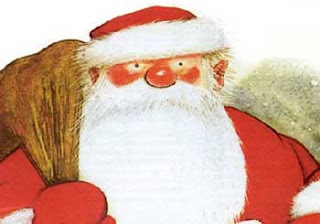 Obviously this is an apt time of year to raise this subject: I've been reading books full of reports of encounters with UFO's, ghosts, lake monsters and other cryptids, fairies, elves, gnomes, green men, blue men, pink men, moving castles in the sky etc etc etc for many years. Skeptometrists respond by saying these things are all just delusion or fraud; lies or pies-in-the-skies. But one thing is missing: How come there are no reports from paranormal witnesses... not a single one... of anyone seeing Santa Claus? (Unless any readers have heard of one; do let me know.)

The Skeppist theory is that we tend to encounter supernatural phenomena that we have been culturally programmed with and this explains a lot of these encounters in mundane terms For instance, a recent article in UFO Matrix magazine (See: http://hpanwo.blogspot.com/2011/11/who-is-wilbert-smith.html attempts to explain a famous UFO close encounter in Scotland in that a similar craft that the witness encountered was broadcast on the sci-fi Tv series Doctor Who the evening before!

However people do not encounter things that necessarily fit in with their belief system or culture. If this were a valid argument then surely we'd see at least a handful of Santas flying over the head of a man out walking his dog at night on Cannock Chase; maybe not many, but a few. Of course every adult knows that Santa is not real, but then doesn't every adult also know that UFO's and ghosts are not real? Despite claims to the contrary, I think that in our culture UFO's/ghosts etc and Santa occupy a very similar status; and if you admit that then you have to admit that this makes it more likely that there is some reality to UFO/ghost etc sightings otherwise Santa would be seen as well, and he's not.
Posted by Ben Emlyn-Jones at 00:57