I've got a Banned Book! 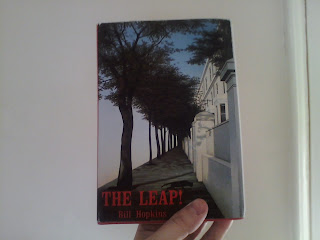 I’ve managed to get my hands on a banned book! I feel really pleased with myself and a little excited. To be honest the book is not banned as such by law in the same way that many books were banned under the former Communist or Nazi regimes. It was published in two editions, firstly in 1957 as The Divine and The Decay and then in 1983 with a new title, The Leap!, and a foreword by Colin Wilson. It is a copy of this second edition that I managed to buy off Amazon for £30; copies of the original sell for hundreds. As I said, the book was not banned by law, but it was “voluntarily recalled” by the publisher and every unsold copy was pulped.

The author is a man called Bill Hopkins who was born in 1928 and was famous in the post-war decades for being included as part of the “Angry Young Men” literary school, along with other notable writers like Harold Pinter, John Osborne, Kingsley Amis and Colin Wilson. He only ever managed to get this one novel published. He wrote a second one, but it never stood a chance with any publisher for the same reason that his first was destroyed. I’ve not read the book yet, but it is said to have “fascistic sympathies”. The political Left-wingers went on a rampage, attacking the book and its author with the kind of ignorance and venom that the Left excels at. Basically they were the same kind of people who gave David Icke such a hard time in Canada, see: http://video.google.com/videoplay?docid=-2912878405399014351# . Today Hopkins is largely ignored by the mainstream. The book is a political thriller whose anti-Hero is Peter Plowart, a ruthless and power-hungry statesman who seeks refuge on Vachau, an imaginary isle in the Channel Islands to provide an alibi for his assassination of a political rival. The work is said to be Nietzschean, inspired by the philosopher Friedrich Nietzsche. (Here’s some background articles on philosophy: http://hpanwo.blogspot.com/2010/11/meaning-of-life.html and: http://hpanwo.blogspot.com/2010/10/in-burning-darkness.html ) Nietzschean artworks are renowned for their pitilessness, and dark and potent harshness, “killing God” as Nietzsche put it. They are completely devoid of all sensitivity, compassion and political correctness.

The copy I’ve got is signed and dedicated to somebody called “Barry”. There’s a covering letter folded inside from a friend of the author’s. Considering this it really was a bargain. I’ve written to the Amazon seller to tell them that if they have any more signed and/or dedicated copies then they might consider bumping up the price a bit. I look forward to reading it. I may not agree with all the book’s philosophies, or I may agree with them and not find them objectionable at all (After all I don't find David Icke objectionable), but I’m very curious. As far as its “fascism” goes, the only real fascists involved with this book are the ones who attacked it in the first place. Destroying books: the very cipher of barbarism.
Posted by Ben Emlyn-Jones at 09:49

Good on you, Ben. I hope it's good stuff. Myself, I read recently few banned/ rare books, unfortunately available mostly as eBooks. That is one of pros of modern technology - someone somewhere uploads that stuff, and you can read or watch it in no time. Say, 10-15 years ago, it would be a large logistic issue.

Looks like the book you've got, has a dust cover from 1984. The one that was done by artist Frederick Phillips, I believe. What I am really curious about, is what its cover looked like in 1957. Do you know if the original had a picture or an illustration?

Yes Anonymous...the cover for 'The Leap' was by my husband, Frederick Phillips. Bill was his artistic agent when we lived in London prior to moving to Chicago in 1990. The original painting was inspired by the streets around Shepherd's Bush and Ladbroke Grove. Frederick returned to the UK after 17 years in America and continues his painting career. His oil paintings are collected around the world. More can be seen at www.frederickphillipsart.co.uk

Yes Anonymous...the cover for 'The Leap' is from an original oil painting by my husband, artist Frederick Phillips. Bill was his artistic agent when we lived in London during the 80's and prior to moving to the USA in 1990. We have many happy memories of long evening spent talking with Bill about every subject under the sun - quite a unique (but often misunderstood) man! The original painting used on the cover was inspired by the streets around Shepherd's Bush and Ladbroke Grove. We returned to the UK in 2007 where Frederick continue his painting career; his work is in great demand from collectors throughout the world. To see more art by Frederick Phillips, please visit www.frederickphillipsart.co.uk