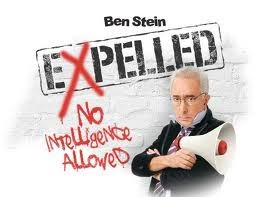 The official website for Expelled- No Intelligence Allowed has been taken down. This controversial film is now available on YouTube: http://www.youtube.com/watch?v=cEvq4xIHmH4

I'm personally not convinced by the ID-Theorists at all, not that the film covers their actual ideas in detail. I also fail to see why there's such a theological imbroglio over it. Even the Pope is now an Evolutionist! It also bothers me, sespite the film's reassurances, that there is a link between ID institutions and the American Religious Right. However why shouldn't God, if He exists, have used Evolution; that's far neater than all these messy miracles!

But it does worry me when lecturers are thrown out of university for their ideas. This has happened before with Climate Change, Alien Abductions, vaccines, Near-Death Experiences etc.

Here's a webpage countering the movie: http://www.expelledexposed.com/ How dare the Skeppies whinge because they were tricked into being interviewed! There are any number of occasions where Skeptical agents have sneaked into Woo facilites, posing as mediums, astrologers etc. How about Penn and Teller? Hypocrites! In fact Dawkins, if not the others too, would have refused to participate in the film if he'd been told the truth. Under the circumstances, Ben Stein did the right thing.

The movie concentrated on the political and socio-scientific paradigm issues relating to the individuals involved in the ID Movement; it didn't explore the actual science very deeply. That's a shame, although I can see that covering both aspects would be a lot for one movie. Perhaps Stein could make a sequel about the idea behind ID itself
Posted by Ben Emlyn-Jones at 15:50