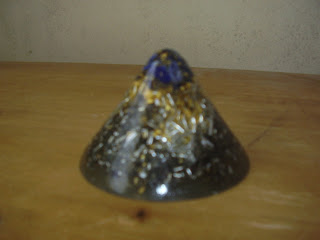 Orgonite was developed by the students of Wilhelm Reich (Background: http://hpanwo.blogspot.com/2007/10/legacy-of-wilhelm-reich.html ) Unlike the Accumulator and Cloudbuster, a piece of Orgonite has quartz blocks in it to act as a filter for DOR. This means that the serious illnesses and injuries caused by incorrect use of the original Orgone generators can't happen with Orgonite.

I bought this at the Now That's Weird Conference. It was only £15 yet it creates an Orgone field with a radius of several hundred yards, so my neighbours will be benefitting from it too! I'll let you know how I get on with it.
Posted by Ben Emlyn-Jones at 00:09

Bullshit. This has nothing to do with Reich's work.

After a year has gone by I can tell you that I've been feeling healthier generally since getting the Orgonite. I sleep better, digest my food better and are more full of energy. People say I look younger and I feel it!