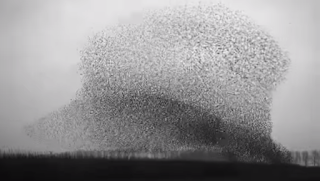 The Department of Food and Rural Affairs- DEFRA has published its post-mortem report on the mysterious death of over three hundred starlings on , two months ago, see here for essential background: https://hpanwo-voice.blogspot.com/2019/12/bird-deaths-explained.html. The toxicology reports came back as negative; the birds were not infected by any unusual bacteria, virus or chemical. They were killed by blunt force trauma. Many of them had broken bones and internal bleeding. The veterinary pathologists on the case think that the birds crashed into the ground while taking evasive action to avoid an airborne predator, possibly a hawk. Starlings often gather together in enormous flocks called "murmurations" that can include thousands of birds flying together in tight formation. Source: https://www.msn.com/en-gb/news/uknews/mystery-of-300-starlings-found-dead-in-middle-of-road-may-have-been-solved/ar-BB102sQt?li=AAnZ9Ug. Murmurations are a spectacular sight. The individual birds fly so close and react so quickly that they act like a single object. No human aerobatics pilot could ever come close to such a performance, for example see: https://www.youtube.com/watch?v=V4f_1_r80RY. This murmuration phenomenon is so tight and unified that for a long time psychical researchers thought that it was evidence for telepathy; that the birds literally form a collective mind when flying like this. However, when films of murmurations are slowed down enough, it's possible to see that the birds do act as individuals, following the one in front. Their reactions are incredibly fast, but they are finite and so not telepathic. This still leaves the question of why such proficient flyers would flee from a hungry bird of prey by diving headlong onto the ground. The manoeuvrability and quick thinking that starlings obviously enjoy in abundance would surely prevent that. Obviously they are not perfect and accidents happen, but why did it happen in this case three hundred times?
See here for background: https://hpanwo-voice.blogspot.com/2015/01/eyes-in-outer-space.html.
And: https://hpanwo-voice.blogspot.com/2014/07/lynmouth-flood.html.
And: https://hpanwo-voice.blogspot.com/2019/10/no-chemtrails.html.
And: https://hpanwo-voice.blogspot.com/2017/10/i-survived-ophelia.html.
Posted by Ben Emlyn-Jones at 16:31