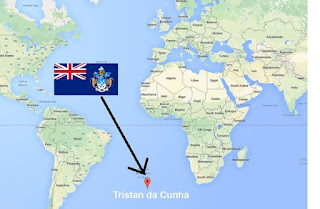 The thing which gives its uniqueness is its small size and isolation. As I've discussed in the background links below, that isolation is now threatened by the imminent opening of the new airport, but even if my greatest dread is realized and the airport transforms the island into a globalist ghetto, is not the last untouched place on earth. There is another island which, to the outsider's eye, looks even more like than is. What's more, regular readers will already have heard its name because it is part of the same as . is an archipelago of islands in the some 1,200 miles south of . Believe it or not, it is even more remote; in fact the nearest continental land is 1,500 miles away on the coast of . It is 2,260 miles from , almost the same distance as to , making the British Overseas Territory of St Helena, Ascension and one of the largest nations on earth; at least when it comes to internal distances. It was discovered in 1506 by the Portuguese explorer Tristao da Cunha, who named it after himself, and a permanent colony was established there in 1810. The island played a crucial role during the exported skirmishes of American wars; the one with in 1812 and the American Civil War in which Confederate warships carried out strategic attacks against Union whalers in the vicinity. The islanders suffered from famine and disease and several times the authorities offered to evacuate them, in the same way St Kilda was, see: http://hpanwo-voice.blogspot.co.uk/2015/11/st-kilda-revisited.html, yet most of the people, the Tristanians, bravely chose to remain. Like St Kilda, the islanders of used no money for most of their history. A currency was introduced during World War II when the place was used by the Royal Navy as an electronic intelligence base. At the same time, the first formal government was also established there in the form of an official "administrator". During the mid-20th century the quality of life improved there, but several things still happened to demonstrate that living on still had its dangers and hardships. In 1958 the Americans detonated a nuclear bomb in space just a hundred miles away from . Both and Tristan are volcanic islands, except 's volcano has not erupted for over ten million years. Tristan's erupted in 1961 and this time the islanders had no choice. They abandoned their homes and set sail in the community's fishing boats. Luckily they were quickly picked up by a passing ship and taken to . They then headed for the and were given accommodation in Calshot, Hampshire. The houses built for them are still there on a street named Tristan Close in their honour. It must have been a huge culture shock for them suddenly arriving in a huge country with millions of people after knowing only their small island and handful of fellow colonists. In 1963 when the volcano calmed down most of them returned to their home on . 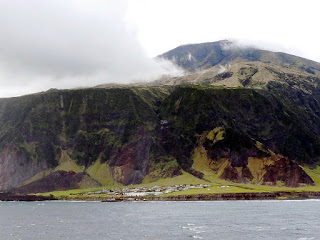 Most Tristanians live in the main settlement called of the Seven Seas, named in honour of two visits by the Duke of Edinburgh. The first in 1867 by Prince Alfred and the second in 1957 by the present one, Prince Philip. The islanders farm potatoes on collectivized allotments in a place called The Patches. They also catch fish and shellfish. There are some livestock, but their population is strictly limited because of the small amount of pastureland available. Everybody helps grow the potatoes, but also usually has a second job supporting the island's community. They earn some money exporting handicraft goods to collectors by mail order; also their exclusive postage stamps. Tristan's currency at present is the pound sterling. The economy of is remarkably similar to St Kilda's. Maybe small island communities naturally fall into that kind of lifestyle out of necessity. The only way to reach is by sea. There is a regular service of fishing boats from Cape Town, South Africa that call in every few weeks to deliver and pick up goods, but the voyage takes eighteen days, see: https://www.youtube.com/watch?v=n4ElF8awm90. Occasionally a cruise ship will call there and the RMS St Helena has paid a few visits; but generally the islands are left to their own devices. There are currently two hundred and seventy islanders and the society has been modernized in recent years. There is limited internet access at the moment, even though there is a fast development towards full access on . Tristan had a trial run with it that didn't work; but no doubt that will change soon and there is currently a working internet cafe in of the Seven Seas. There is just one policeman. At the time of writing there are no plans to build an airport on . My feelings about that are the same as they are for . At the end of the day, it's up to the people who live there what they do with their own island. However I myself have lived my whole life in the belly of global cultural uniformity. From the outside it can look magical. The bright lights of civilization are very alluring, as they were for the people of St Kilda and the myriad of other indigenous cultures around the world that have become extinct because the people couldn't resist the temptation of joining the party. It's ironic, but many people in my homeland yearn for the kind of lifestyle people enjoy on and . The grass always looks greener on the other side of the fence, as they say. I know now why I was inspired to write my novel Rockall, see: http://hpanwo-bb.blogspot.co.uk/2009/02/rockall-chapter-1.html. The objective of the planetary elite is to have the entire world's population... all five hundred million of us, barely ten percent of people presently alive, living in cities that are all the same in every way, from pole to pole, without exception; with every aspect of our short lives controlled by a single dictatorial state. They have succeeded with most of us. Gathering the remaining indigenous peoples left into the concentration camp is just a mopping up exercise. However, only when the last Saint and Tristanian has surrendered their uniqueness, has gone to work in their Job Seekers Allowance "work experience" placement at Starbucks, has bought their new I-phone, has settled down in front of the telescreen to watch The World hasn't got Talent, will the human species finally have accepted their rule... So the conquest isn't over yet.
See here for background: http://hpanwo-voice.blogspot.co.uk/2016/09/tasers-on-st-helena.html.
And: http://hpanwo-voice.blogspot.co.uk/2016/08/st-helena-airport-update.html.
And: http://hpanwo-tv.blogspot.co.uk/2016/06/st-helena-airport-opens.html.
Posted by Ben Emlyn-Jones at 17:27