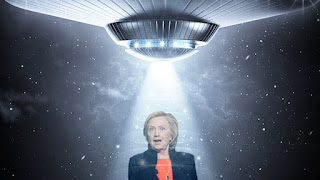 The next President of the is going to be Hillary Clinton. She is the "chosen one", I have no doubt. They've had a black man and now they're going to play the political correctness card again by having a woman. Two days before New Year I uploaded the last instalment in my HPANWO TV film series UFO Disclosure 2015, in which I discussed a letter written to her by Stephen Bassett, see: http://hpanwo-tv.blogspot.co.uk/2015/12/ufo-disclosure-2015-i-know-it-didnt.html. Steve urges Hillary to do what her predecessors have failed to do and become the Disclosure President. He says to her: "Madam Secretary... what the American people need is less legacy and more truth. The people have lost patience with 'in loco parentis' government that treats them like children and candidates with long lists of issues they can't discuss because it is not convenient to their campaign or the people 'can't handle the truth.' Because you have been introduced to these matters within the context of the White House (through the Rockefeller Initiative), because you aspire to the highest office in the nation, you have an extraordinary opportunity and primary obligation to address what is easily the most profound issue of our time..." At the time I uploaded the video, Hillary Clinton had made no response to him; but now she has, albeit indirectly. Perhaps it was the influence of her campaign manager John Podesta, who is very open to the ideas of UFO's and whom Steve has advised us to "Google his name regularly!", see: http://hpanwo-voice.blogspot.co.uk/2015/02/john-podesta-on-ufo-disclosure.html.

The weekend after New Years Day while speaking at a public meeting in , she told a reporter, Daymond Steer, that she will get to the bottom of the UFO phenomenon. As long ago as 2007, Hillary had confirmed that her husband President Bill Clinton received more Freedom-of-Information Act requests related to UFO's than any other subject. Nick Pope has confirmed that the same happened at the UK Ministry of Defence. Master Clinton has also made several cryptic references to UFO's in his interviews and public speeches. He responded to a letter from a thirteen year old boy from called Ryan who asked him about the Roswell Incident, see: https://www.youtube.com/watch?v=wSMhNk8wSng. He also mentioned the subject during his interview with Jimmy Kimmel, see: https://www.youtube.com/watch?v=gZqLlHRepSo. It's possible he's not as ignorant as he pleads. Hillary's own interview on the Jimmy Kimmel Show consisted mostly of tiresome feminist jokes and she never uttered a peep about UFO's, see: https://www.youtube.com/watch?v=2OLchWH8jjI. Yet just a few days later she is saying she's going to "get to the bottom" of the matter? She also pledges that if she gets elected in November she will "look into Area 51". Apparently Bill did that too and found no aliens there, but I doubt they had them on display for him to see. What's interesting about the language Hillary uses is that she also talks about assembling a "task force" to enter Area 51. Was she serious or joking?... Or maybe she was half joking. The old man known as "Agent Kewper" said during his deathbed confession that President Eisenhower had a similar plan, see: https://vimeo.com/64939351. This indicates something I've addressed before about a comment made by the lawyer who represented Robert Frost and his colleagues, a class action lawsuit by some men who had served at Area 51 and become ill as a result: "I don't know (if there are aliens at Area 51), my client never saw any; but it wouldn't surprise me. You must realize that place is a legal black hole. It operates above Congressional oversight, above executive oversight; hell, even the President himself cannot enter it without permission. One is forced to consider whether it is even part of the at all, and might instead be an enclave of some kind of 'super-government'." (My emphasis). These are astounding words, but they are potentially accurate. My friend and fellow researcher Gary Heseltine, the editor of UFO Truth Magazine, see: http://hpanwo-voice.blogspot.co.uk/2015/11/ufo-truth-magazine-issue-15.html, has commented to the Daily Mirror: "I am well aware of the Rockefeller initiative and that both the were heavily involved in it. It was inevitable that Hillary Clinton would be asked questions about her links to it and I am pleased that she has responded to them. She cannot run away from those links so she really has to embrace it in order to remain credible. It will be interesting to see how much of a political issue it will become in her presidential campaign.", see: http://www.mirror.co.uk/news/world-news/hillary-clinton-reveal-truth-ufos-7111722. It most certainly will be. Interestingly, at the bottom of the above news article there is a readers' poll which asks: "Is there a UFO cover-up?" Over five hundred people have voted and the figures are an encouraging YES- 83% No- 17%.
See here for background: http://hpanwo-radio.blogspot.co.uk/2015/09/programme-153-podcast-stephen-bassett.html.
And: http://hpanwo-voice.blogspot.co.uk/2015/08/russia-disclose-ufos-or-we-will.html.
And: http://hpanwo-voice.blogspot.co.uk/2014/11/2015-year-of-disclosure.html.
Posted by Ben Emlyn-Jones at 17:05

Hi Ben being a religious person The UFO phenomenon conflicts with my faith although I said previous I did see one on a Train journey from Portsmouth to Bristol in 1982 league cup gsme in the evening although a object the size the sun moving across the Sky that was bright orange red nr Warminister.many passenges saw the object from the right hand side for some minutes intestingly their was no other witnesses in nearby towns unless their was a cover up ? Since then late 1990s I have and seen crop circles and pictures in Sussex nr Patcham Brighton .
UFO do get a mension in the Bible if you do a Google search ! Either UFO s. Or Gods chariots or devils work ?

That's true, David. I've understood that since writing this. The Book of Ezekiel is often thought to be the world's oldest UFO report. Also the angels who rescued Lot and his family from Sodom and Gomorrah resemble the Men-in-Black phenomenon. Islam is even more au fait with ET's than Christianity with its concept of the Djinn, which are interdimensional beings. Hinduism has legends of the Vimanas etc. There is less conflict than you might think between UFO's and religion. I myself accept the existence of a consciousness to the universe that it's convenient to call "God" even if I don't go to church.