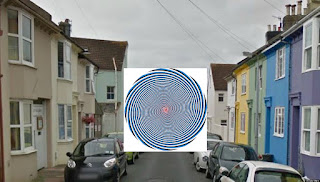 The Metro, a free newspaper distributed on buses, trains, railway stations and other public places related to transport, has published the most remarkable story, see: http://metro.co.uk/2013/05/13/brighton-resident-discovers-vortex-to-another-dimension-3757346/. This story was picked up from The Argus, a local paper covering Brighton and Hove in East Sussex, see: http://www.theargus.co.uk/news/10414195.Vortex_to_another_dimension_reported_in_Brighton/?ref=fbrec. An anonymous local resident has made a report on a website normally used to report public hazards and incidents involving local government services, like unemptied dustbins and broken traffic lights; their report seems to have now been removed, see: http://www.fixmystreet.com/reports/Brighton+and+Hove?p=1. The person was walking their dog along Montreal Road in the Hanover area of Brighton when they realized that they had encountered a “wormhole or vortex… a portal to other times, places and dimensions”. How the person perceived this portal is not revealed, but the witness did wonder if it was a piece of decoration for one of the many street festivals and carnivals which Brighton is famous for; this leads me to assume that the phenomenon is visible to the naked eye. Their concern for the safety of their dog caused the witness to leave the scene. However a few days later they made a new report claiming that the portal was still there and was emitting a “yellow light” and a large snake was emerging from it. No other witnesses to the event have come forward and Brighton and Hove City Council say they’re not pursuing the matter any further.

At first glance this might appear to be a novelty story published amidst the “real news” for the purposes of the reader’s amusement, in fact the usually more reliable Huff-Po treats it as such: http://www.huffingtonpost.com/2013/05/14/mysterious-vortex-alleged_n_3268054.html. But the tone of mockery I’m used to detecting in news stories like that is absent; also the author of the original article is The Argus’ crime reporter, Anna Roberts. The article has the disquieting timbre of severity. Could it be that the witness really did see a portal to another dimension? The interesting part of the report is the snake. Serpentine creatures are a commonly and repeatedly reported aspect of many altered states of perception, from LSD trips to occult rituals. Almost anybody who experiments with psychedelic substances or some of the more extreme kinds of magick spells will at some point encounter a serpentine being of some sort or another. Graham Hancock met the Spirit of Ayahuasca while under the influence of the drug and it appeared in the form of a huge blue snake that wrapped itself around Hancock’s body and stared into his eyes (Supernatural 2005). Snakes have an association with evil and deceit; from Satan in the Garden of Eden to nasty people being called “poisonous snakes”. But this is merely a Western cultural connotation, perhaps emerging out of early Christian propaganda. In other cultures snakes are sometimes seen as benevolent, wise and protecting. Of course I know that a snake is a physical creature of this world, a legless reptile, but very often when people encounter entities which are not physical they impose on them a familiar physical image, and snakes are one of the most common. I don’t know why.

The idea that this universe of three dimensions of space and one of time is not the only one that exists is perfectly mainstream nowadays; it’s been accepted by academic science. There’s even discussion about whether the Large Hadron Collider might be able reach them. Reading the book Flatland by Edwin Abbott is a good way to understand the concept: http://hpanwo.blogspot.co.uk/2008/09/flatland.html. In fact cosmologists have started referring to our own universe, and also others, as “membranes” that occupy different locations in the Fourth Spatial Dimension. It could be that under certain circumstances our own membrane might brush against another and there is a bleed-over between it and the other; ghosts and UFO’s could be explained by this. It also might be possible to create passages between our membrane and others artificially. This could be done using supernatural magickal and occult ceremonies, and also heavy industrial processes involving known science and engineering, perhaps even a combination of both. Our mind’s eye could be capable of seeing into other membranes even if we can’t travel there physically. In that case, has our dog-walking witness in Brighton alerted us to a genuine hazard that should concern us? Potentially, yes. As Uncle Andrew, a character in CS Lewis’ The Magician’s Nephew, said: “You could meet anything! Absolutely anything!” and you could. The horror film The Mist explores the most nightmarish theoretical scenario when it comes to interdimensional invasion, see: http://hpanwo.blogspot.co.uk/2008/11/mist.html. However there’s nothing in this report to indicate anything monstrous is popping out from the membrane next door and there have been no further complaints from other residents. I’m more curious than worried by this article. The anonymous witness must have gone to FixMyStreet.com because where else could they report such an event? There is no official dot-gov webpage for dealing with the arrival of spontaneous stargates. However the witness could have come to me; in fact, witness, if you’re reading this article then could you please contact me because I’d like to know more about your experience. I’ll treat anything you say with the strictest of confidence.

(Edit 7.50PM) Somebody who lives in Brighton told me that this might just be somebody trying to make a witty joke about the size of the potholes on Brighton's roads.
Posted by Ben Emlyn-Jones at 17:00

Great article Ben, didn't know about this, thanks. There's supposed to be something similar in Bold Street,
Liverpool apparently: