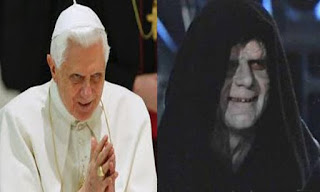 In a surprise statement from the today "His Holiness" Pope Benedict XVI has announced his resignation on the 28th of this month. See: http://www.bbc.co.uk/news/world-21411304. Papal abdications are very rare indeed. Popes almost always die in office; in fact this is the first time a Pope has willingly stepped down while alive in over six hundred years. I wonder if St Malachi's prophesy is about to come true. St Malachi was an Irish bishop who had a vision while on a pilgrimage to in 1140. He said that the church would not last for ever and there would only be one hundred and eleven popes after the current one. Well, the hundred and tenth was Benedict XVI.

I wonder if his resignation is really down to old age and his health. I can't help but hope that it might have something to do with Kevin Annett's lawsuit, see: http://hpanwo-radio.blogspot.co.uk/2013/01/programme-29-podcast-kevin-annett.html. Benedict, or to give him his usual name: the former Nazi Joseph Ratzinger, wants to get out of the way before the net closes! I can also only hope that St Malachi was right; as Ben Hur said in the classic movie: "The day falls there will be a shout of freedom like the world has never heard!" The down side of all this is that it has helped to have a Pope that actually looks are vicious and deceitful as Popes invariably are. See the picture above; I noticed myself, although I was not the first to notice, his resemblance to Emperor Palpatine from Star Wars. I hope the next one is not a sweet old grandfatherly figure like John Paul II, the one before Benedict.
Posted by Ben Emlyn-Jones at 23:00