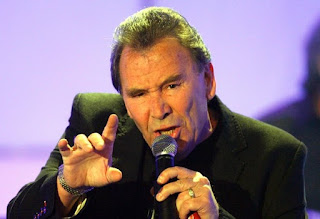 I’m sorry to report that Reg Presley has died at the age of 71. He passed away peacefully with his family around him. The famous singer-songwriter who became a noted crop circle and paranormal enthusiast was diagnosed with cancer while on tour in Germany in January 2012. Reg was a 1960’s pop icon and lead vocalist for his band The Troggs; the band was best known for their hit singles Wild Thing and Love is all Around. The Troggs has enjoyed significant “post hit-parade” success which continues to the present day. However Reg’s life changed forever at the age of 50 when he walked into a crop circle near his home in Hampshire. The phenomenon enthralled him, along with all the associated areas of research like UFO’s, conspiratorial matters, ancient stone monuments, hidden history and Spiritualism. As good fortune… or the Law of Attraction… would have it, his awakening occurred at the same time that one of his songs, Love is All Around, was covered by Wet Wet Wet and became a Number 1 smash hit providing Reg with a considerable amount of money to spend on his research. He wrote a book called Wild Things… They don’t Tell Us. Here’s my HPANWO review of it: http://hpanwo-voice.blogspot.co.uk/2010/09/wild-things-they-dont-tell-us.html. The book is full of information and amazing narratives from Reg’s life. For instance, even long before he became interested in crop circles, he once had a precognitive experience. He was watching TV news at lunchtime on the 1st of June 1974 when he saw a story about an explosion at the Flixborough chemical plant in Lincolnshire killing 28 people and burning down the entire village. This disaster did indeed happen… but it didn’t take place until 5pm that afternoon. Reg is one of a number of people who had this psychic premonition that day. Reg relates these subjects in his book with detailed and intelligent analysis, but also with an ingenuous, wide-eyed almost child-like tone. I only met Reg briefly at a conference and never got to know him, but those who did say he was a very sweet and down-to-Earth character. Not that he couldn’t be fiery when he wanted to be! Here he is arguing with his fellow band-members (WARNING- strong language): http://www.youtube.com/watch?v=M9n46CZLAH8.

When somebody in their adult life suddenly becomes aware of the subjects Reg did, it can cause a great deal of friction with family and friends who do not share these insights. However when that person is a celebrity, and so is continually in the public eye and known to many strangers as well, it can generate additional difficulties that non-celebrities do not have to face. The best example of this is David Icke; and David has described in great detail how he would walk down a street and people would point and jeer at him. It takes an enormous amount of courage and dedication to resist that kind of abuse. Reg doesn’t mention suffering in that way, but he must have done so. Sometimes these attacks don’t stop when the person has died; take this very tongue-in-cheek obituary from The Daily Telegraph: http://www.telegraph.co.uk/news/obituaries/culture-obituaries/music-obituaries/9849602/Reg-Presley.html. I’m not shocked by it; it’s the kind of snide pillory sentence I’d expect from the Telegraph actually. This one from the BBC is more staid, but it focuses on his music career and only mentions his esoteric investigations as an afterthought: http://www.bbc.co.uk/news/uk-21332048. In his book Reg describes how he managed to blend his new life with his old one for the various tours and recordings he did with his fellow members of The Troggs. He finds a balance which shows he regarded his own life holistically. He is somebody I would have like to have met and would probably have got along well with. It’s sad he never got to write any more books. Rest in peace, Reg.

The death of Reg Presley is the latest in a whole series of bereavements that seem to have struck very close together, both in my personal life and in the wider conspiracy/paranormal community in general. Regular HPANWO-readers will recall how both my girlfriend’s mother and my daughter’s grandmother passed away within a few months of each other, see: http://hpanwo-voice.blogspot.co.uk/2013/01/alternative-funerals.html and: http://hpanwo-voice.blogspot.co.uk/2012/11/sheilas-funeral.html. Just five days before Reg passed away, the psychical researcher and pioneer of remote viewing, Ingo Swann, also died. Just before New Year the researcher Philip Coppens passed away at a very young age, see: http://hpanwo-tv.blogspot.co.uk/2013/01/philip-coppens-dies.html. Not to mention the recent passing of CMR host Revd George, see: http://hpanwo-radio.blogspot.co.uk/2012/11/cmrs-reverend-george-tribute-special.html. It has also just been announced that a lady who is well known in the UFO research community has just lost her father. I hope this succession of continual departures from this Earthly universe ends soon.
Posted by Ben Emlyn-Jones at 11:51