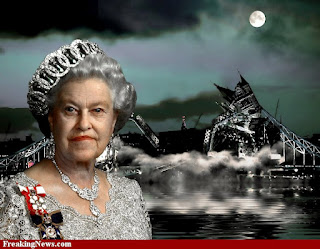 Elizabeth Alexandra Mary Saxe Coburg Gotha Mountbatten this weekend is celebrating 6o years on the Throne of England, and unfortunately millions of ordinary people across the country and around the world are also doing so. The weekend of Diamond Jubilee festivities include a special horse racing event at Epsom, a Sunday cruise down the River Thames with a Royal barge, and a massive ceremony in central London around Buckingham Palace. The weather is chilly and wet, just as it was 59 years ago at the Coronation (following her official accession 60 years ago). It's raining on her parade, literally. Is Mother Earth trying to say something?

Queen Elizabeth II is currently 86 years old, but never seems to suffer from Alzheimers Disease, osteoporosis, or any of the other geriatric complaints that make millions of other senior citizens’ lives a misery. I bet she eats organic food and has access to hemp oil, Vitamin B17 and all the other medical marvels that we, the people, are forbidden from using. She is the incumbent monarch of the so called House of “Windsor” which is in fact the German aristocratic dynasty of Saxe Coburg Gotha, related to the Hapsburgs, one of the 13 bloodlines of the Illuminati. Far from being the epitome of everything we think of as English, she is primarily German; and Germany is the country Britain has been manipulated to fight during the 20th Century, in the two most destructive wars in history. She is not only Queen of England, but also of 18 British Commonwealth nations, covering one sixth of Planet Earth’s land surface. Secretly she rules many many more, including Ireland, the United States of America, Israel, Zimbabwe and India. She is without a doubt the richest and most powerful individual in the world… at least among our rulers who are on public display.

Her income is incalculably large; even her official, overt property and capital is enormous; enough to feed every hungry person in the world a dozen times over, replant every felled tree in the Amazon 5 times over, and provide 104 pounds 47 pence for every man, woman and child in Great Britain. She owns 6.6 million acres of land, far more than the second biggest landowner on Earth, King Abdullah of Saudi Arabia, at 5.53 million acres. She is the biggest landowner in the United States and acquired her territory in a strange manner. She covertly bought up the land on which the mysterious and sinister Denver Airport is built, under an alias; this means every traveler who passes through this very busy airport unknowingly pays rent to the Queen through part of their airline ticket. The value of this land in raw capital, based on current estimates, is 17.6 billion pounds.

Everywhere I go at the moment bunting and Union Flags can be seen in shop windows, outside pubs and bookshops. There are private streets parties going on, as well as crowds gathering at the official rituals as loyal subjects pay homage to this Black Madonna. This is the third such event during the 6 decades of her reign. The Silver and Golden Jubilee preceded it in 1977 and 2002 respectively. I was only a small child at the time, but I remember going to a Silver Jubilee celebration in my hometown of Lampeter in west Wales. I recall eating lemon meringue and being sick because of it! The Silver Jubilee was a major festival in Lampeter, even though this was in the heart of Welsh-speaking Wales at a time when militant Welsh nationalism was at its peak, and quasi-terrorist groups, with links to the National Front and the IRA, stalked the green hillsides. It astounds me how much adulation and worship this evil-eyed, reticent and ghoulish old woman manages to inspire. Those of a more sensitive and psychic nature have seen her take on a ghastly Reptilian form, nominating her as one of the Annunaki, the legendary “serpent race” who conquered the Earth in prehistoric times (David Icke, see the main HPANWO site’s Links column)

There are appeals for reason and resistance, in some places rising above the doting clamour. In fact during the Silver Jubilee this very irreverent song was number 1 in the charts: http://www.youtube.com/watch?v=yqrAPOZxgzU&ob=av2n . It was banned from Radio One and Top of the Pops; one of only two occasions this has happened. Nowadays we have the Internet which makes it far harder to ban things. I don’t think this new song for the Diamond Jubilee will get onto Top of the Pops, but who cares!? See: http://www.youtube.com/watch?v=hCA473UBaqY

Excellent overview Ben. I have linked up to this article in my current post - http://thetruthseekersguide.blogspot.co.uk/2012/06/queen-of-sheep.html

All the best mate.
Carl (The 'Guide)

A truly awful gang of shit bags, and we as people heap worship upon her and her inbred leaches. Forget single mums who filch off the dole what about Lizzie and her scrounging brood.

Thanks, Carl. I'll have a look at your article too.

It is very frustrating, 100th M. I would drive me crazy if I didn't have articles like this to let off steam!