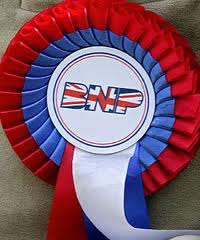 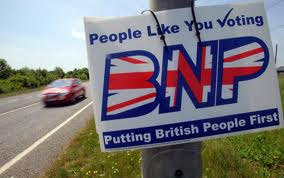 Many of its critics claim that the BNP is attempting to give the public a very false image of itself; not that this is unusual for any political party, but the BNP has come under especially harsh accusations of deceit. The other day I discovered an actual example of this myself. Do you remember a few months ago I wrote about a video I saw featuring the supposed “leader of the BNP’s youth section”, Kieran Trent? Here it is: http://hpanwo-voice.blogspot.com/2011/02/nick-griffin-lihop.html . See especially the video linked on the article; this one: http://bnptv.org.uk/2011/02/british-national-partys-%e2%80%98resistance%e2%80%99/ It gives the impression that the BNP has a large and dedicated youth contingent led by a committed and long-serving young member. But this is Kieran Trent again, as he appears in an independent TV documentary, one that was made at about the same time: http://www.youtube.com/watch?v=TlKiqq8tbTw . Here we see a very different person to the eloquent and confident youth who stood up in front of all those boys and girls and explained how he liked V for Vendetta and that the English Defence League is an MI5 front. We see a far younger-looking and less mature person, a teenage boy who looks confused, fearful and very bitter. It turns out at the end that far from being head of any supposed youth section he wasn’t even a party member and chose not to join at all. This means that the BNPTV speech he gave was contrived and totally fictional!

I’m not an obsessive anti-BNP campaigner any more than I am a BNP supporter; I don’t consider the BNP any worse than Labour, Conservative or Liberal. What I’m informing you of is that political parties create shop-window personas of themselves to sell to the public, and we have to watch out for them.