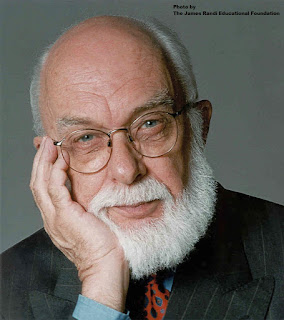 James Randi
to 20th October 2020
The world's most prominent skeptic, James Randi, has died at the age of 92. James Randi, or "The Amazing Randi", real name Randall James Hamilton Zwinge, was born on in and was found to have a very high IQ as a small child. He was drawn to stage magic and used to play truant from school to watch conjurors performing in theatres. As soon as he was old enough Randi began performing himself in nightclubs and music halls and eventually toured internationally. His speciality was escapology, like his hero Harry Houdini, see: http://hpanwo.blogspot.co.uk/2009/05/houdini-code.html. He burst out of bank vaults, milk churns and locked rooms. He even escaped from chains while hanging upside-down over . All through his career he was asked if he had any supernatural powers and he always said "no". In those days some illusionists did pretend to be truly paranormal and this angered Randi who was a skeptic from birth. Eventually his skeptic activism took centre stage in place of his magical career. He was described as the "scourge of psychics, frauds, quacks and pseudo-scientists." He set up the Million Dollar Paranormal Challenge in which he promised to offer a million dollars US to anybody who could prove real supernatural or psychic phenomena in a properly controlled scientific test. He has stated many times that nobody has ever passed even the preliminary stages of the Challenge. He began the challenge in 1964 and first put up one thousand dollars of his own savings. This increased over the years as donors, most of them anonymous, added more to the pot. He first made his name internationally as a skeptic in 1972 when he publicly denounced Uri Geller as a fraud. Geller sued Randi and a long legal battle ensued. In 1976 Randi was among the first people to be asked to join a new skeptic organization called the Committee for the Scientific Investigation into Claims Of the Paranormal. Its acronym CSICOP is pronounced "psi cop". This is probably a pun, suggesting the organization is intended to be the policemen of paranormal investigation; although its founder Paul Kurtz denied this. Randi set up his own organization in 1996, the James Randi Educational Foundation.
James Randi's death was not unexpected at his advanced age. The JREF website says this was due to "age-related causes". Source: https://web.randi.org/home/james-randi-has-died. Sometimes very old people do die from no obvious cause. A tribute biographical feature length documentary about him was made by Justin Weinstein and Tyler Measom when it became clear his time on earth was coming to an end. It is called An Honest Liar and follows Randi's career and personal life, past and present: http://anhonestliar.com/wp/. There's no doubt that some of the targets of Randi's ire deserved it, like Peter Popoff. However, he also persecuted people I consider honest and harmless. He always rejected the idea of an afterlife, claiming that there was no evidence for it. Presumably if he was wrong, as I suspect he is, he now knows it. He was quite content in life to be accepted as a bitter enemy of people like me, therefore he would not expect us to grieve. However I did meet him briefly at the TAM conference and he came across as civil, see: https://hpanwo.blogspot.com/2010/10/tam-london-2010.html. I would be a hypocrite if I stated any sentiments of sorrow at James Randi's passing, however I will not be so cruel as to dance on his grave. The Amazing Randi had loved ones, friends and family; and his partner Deyvi Peňa aka "Jose Alvarez". They all have my deepest condolences.
See here for the accompanying livestream: https://hpanwo-tv.blogspot.com/2020/10/james-randi-death-livestream.html.
See here for background: https://hpanwo-tv.blogspot.com/2018/01/skeptics-2018.html.
And: http://hpanwo-voice.blogspot.co.uk/2014/12/james-randi-dishonest-liar.html.
And: http://hpanwo-voice.blogspot.co.uk/2014/11/randi-in-crisis.html.
And: https://hpanwo-tv.blogspot.com/2019/04/ben-emlyn-jones-live-at-truth-seekers.html.
Posted by Ben Emlyn-Jones at 00:22

About skeptics passing into the afterlife and what its like for them when they awaken to the fact that their death was only a transition to another channel of being, we have a clue from Famed medium and Journalist William Stead who died on the sinking Titanic. In an area of some darkness William Stead the medium who had just died himself, was explaining things to recently deceased passengers who were disoriented and traumatised. Stead reported that from some he got streams of abuse and jeering vitriol and these had been non believers, ardent materialists and they just carried on their skeptical business as usual. But not all skeptics do that. That 19th century Australian skeptic Richard Hodgson lawyer died and made proven contact with his skeptical friends thru a medium, Correction his skeptic friend Pellew died. if memory serves, Leonora Piper. So there is a possibility Randi could make contact thru a medium to verify his survival. Icing on the cake would be if he could materialise thru a physical medium, like David Thompson. I wonder if he could be asked by source to do that.To finally do something useful. I am immediately told he will be asked. Others have responded to the surprise of death and afterlife such as Father Benson who was so apologetic for teaching falsehoods in his earthly priest job he dictated thru mediums for years explaining afterlife as it really was. So, fingers crossed for James Randi !

Hi Steve. It will be a strange experience for him no doubt. I wonder if he might not know he is dead and live in a life simulation like the main character in the film Jacob's Ladder. However, I have a theory that he knew very well there is an afterlife and just was part of the plot to suppress it for political reasons in the same way UFO's have been. I need to write or film or record a full explanation of that theory.