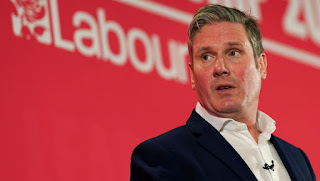 The non-stop headlines about the coronavirus have for the first time come close to being upstaged, but for what? An election has just come to an end which is by far the least exciting in living memory. The new Leader of the Opposition is Sir Keir Starmer KCB QC, a politician who has only been an MP since 2015. Following their humiliating defeat in last year's general election, see: https://hpanwo-tv.blogspot.com/2019/12/post-general-election-livestream.html, the Labour Party's leader Jeremy Corbyn announced his impending resignation, but it was a long slow process of replacement. A row of candidates stood for election which was eventually reduced to three, Starmer, Lisa Nandy and Rebecca Long Bailey. There was no doubt about this outcome because Starmer had a massive lead in opinion polls over his two rivals. For those who have been on the edge of their seats over this... which is just the three people who are the candidates, the outcome is fairly inconsequential. Keir Starmer describes himself as "a socialist but not a Corbynite" and he wows to "keep key policies from the Corbyn era", such as nationalising rail, mail and water and repealing anti-union laws. He takes a soft to medium leftist stance on most issues. What independent principles he actually represents is uncertain. He said his task was to "lead this great party into a new era". What new era? Source: https://www.bbc.co.uk/news/uk-politics-52164589.

It is interesting to notice how the Labour Party are responding very differently to their current lack of success to how they did in the 1980's when they were faced with a similar situation. In the 1992 general election they lost to the Tories for the fourth time in a row and Neil Kinnock (today an EU Commissioner) resigned and was replaced by John Smith. Smith conveniently "died of a heart attack" allowing one of 's most controversial Prime Ministers, Tony Blair, to take office. Under Smith and Blair, Labour took a rapid and radical lurch to the centre. Their conference slogan became "Meet the challenge- make the change". After their 2019 election loss the consensus in Labour was to stand by the principles that led to Corbyn's leadership. They are doubling down and digging in on socialism. Many Labour members and supporters have commented on how disappointed they are that a white heterosexual male ("Ugh!") is once again in control of the party. They were hoping that the next leader would be a woman, or as they say in Labour "Woman!" I agree and I personally supported Rebecca Long Bailey, although not for the usual reason. Starmer is very establishment. He has been knighted and is one of the nation's top lawyers. He is a barrister and was once head of the Crown Prosecution Service. Most sinister of all, he is very much involved with the Fabian Society. I find it amusing that he since he was elected he is most famous for being the Shadow Brexit Secretary, which is pretty much like being the Israeli Minister for Pig Farming. Starmer has chosen Angela Rayner to be his deputy leader. She is a "Woman!", but she looks a bit like an alien. In all seriousness, maybe she is one. For anybody who thinks Keir Starmer will bring any significant change to the Labour Party, remember that he was backed by David Lammy... I rest my case. By contrast, Boris Johnson taking over the Conservative leadership from Theresa May was highly symbolic and has proven to be momentous. Strangely enough, Starmer's first name, which is an unusual one, is the same as the politician who founded the Labour Party in 1896, Keir Hardie. This is also the name of Owen Jones' cat; and I'm guessing that is in reference to the old leader Keir, not the new one. Despite all this, it is probable that Labour will hardly notice the change of leadership in practical terms. For the general public, most will merely wonder why Jeremy Corbyn has shaved.
See here for more information: https://hpanwo-tv.blogspot.com/2019/12/polling-day.html.
And: https://hpanwo-tv.blogspot.com/2019/10/a-very-british-coup-book-review.html.
And: https://hpanwo-voice.blogspot.com/2015/09/the-corbinator-wins.html.
Posted by Ben Emlyn-Jones at 18:23