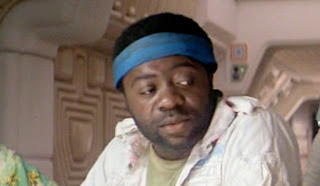 I consider Ridley Scott's 1979 film Alien the best science fiction horror movie ever made. It has spawned an entire franchise of sequels; but all of them fail, to lesser or greater degrees, to rival the splendour of the original. Like all good horror movies, its power comes more from a good knowledge of human psychology than gruesome special effects. What truly scares people deep down? With Alien it is quite often the projected fear of the characters. The acting is so brilliant that the expression on people's faces when they see the creature has more impact than when the viewer sees it themselves. The actor Yaphet Kotto's performance was one of the best in the film. Kotto is also well-known for playing the best ever James Bond bad-guy in Live and Let Die. Now, at the age of seventy-seven, he has announced publicly that he has had real alien contact. Judging by his ripe old age he has clearly encountered real aliens that are far less homicidal than their fictional counterpart. Kotto is from an African Jewish family and Africa is a continent with a long and deep tradition for extraterrestrial visitation that is often overlooked by conventional UFOlogy, see: http://hpanwo-voice.blogspot.co.uk/2014/01/goblin-in-suitcase-scares-cops.html and: http://hpanwo-voice.blogspot.co.uk/2015/04/city-in-sky.html. His experiences began when he was aged nine or ten at his home in the , . He saw a creature one day when he was playing with his friends in the street. He also regularly saw UFO's above his house. These events followed him as he travelled, even when he moved to the . Even when he was in the production of Alien, ironically, he had sightings of real aliens. He once had a close encounter with a mothership that he describes as being "the size of Yankee Stadium". Some of these events involve missing time. Until now only his wife, psychoanalyst and rabbi know about this factor of his life. His wife was with him and shared one of his sightings. The skeptics predictably questioned his mental health, but he says he is perfectly sane and very intelligent; he claims he has an IQ of 196. He also denies that he's seeking fame and fortune. He is already a famous actor who has earned a very healthy living from his talents; he's not writing a book or making a movie that he needs to promote. Like many other contactees, he feels a sense of compassion for the planet earth and wants to help the aliens save it. Source: http://www.dailymail.co.uk/news/article-4744726/Actor-1979-Alien-says-s-abducted-real-life.html. Far from gaining anything, Kotto has a lot to lose be describing his experiences publicly. Everybody who has alien contact experience faces the threat of ridicule and rejection by their family, acquaintances and friends; but for celebrities this risk is far greater because they are recognized by so many other people as well. So well done, Mr Kotto, for speaking out. Good luck and I hope you don't have to endure too much aggravation.
See here for more information: http://hpanwo-voice.blogspot.co.uk/2014/09/ruwa-ufo-twenty-years-on.html.
And: http://hpanwo-tv.blogspot.co.uk/2017/01/ufos-reply-to-stefan-molyneux.html.
And: http://hpanwo-voice.blogspot.co.uk/2015/05/dr-david-clarke-at-greenwich-sitp.html.
Posted by Ben Emlyn-Jones at 18:34

Very interesting that mate as always. You love your flying saucers mate and good to see real passhion Ben. Am note sure to be fare if I believe in em or not. Ive seen some weird lights before but I was probably drunk to be honest. Smasher of a film Alian thow pal. Went to see it with a very fit bird I was giving one to at the time. They say fear turns em on and it did the trick I can tell you mate. Anyway thanks again Ben. Baz

Thanks, Baz. And interesting dating advice :-)