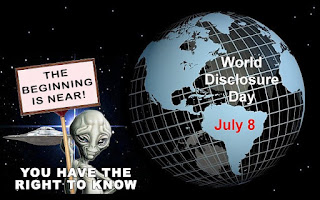 July the 8th is World ET Disclosure Day, and was awarded that status by the Paradigm Research Group in 2010. This is because it was on July the 8th 1947 that General Roger Ramey held a press conference in his office in Fort Worth, Texas USA where he put on display some wooden sticks and some loose, crumpled pieces of aluminium foil and told the world's media that this is what Major Jesse Marcel, chief intelligence officer of the Roswell Army Air Force Base, had mistaken for a UFO. He was lying. Today, seventy years later, the Government are still lying. Many believe that this is the day that the decision was made to institute what Stephen Bassett calls the "Truth Embargo." Reporters were descending like locusts on and and the Government was considering whether to continue with the original "Flying Disk" story, and so come clean that UFO's exist, or to cover it up; they opted for the latter. On the day Disclosure happens that will become World Disclosure Day, but until then it is July the 8th. This year it is special because it is the seventieth anniversary and I've organized an event in to mark it, the only one of its kind in , see: http://hpanwo-voice.blogspot.co.uk/2017/04/roswell-70.html.
See here for more details on willing UFO Disclosure: http://hpanwo-radio.blogspot.co.uk/2017/03/programme-227-podcast-stephen-bassett.html.
And: http://hpanwo-tv.blogspot.co.uk/2017/07/ufo-disclosure-2017-70th-anniversary-of.html.
And: http://hpanwo-tv.blogspot.co.uk/2015/02/energy-politics-and-ufos-2015.html.
And: http://hpanwo-bb.blogspot.co.uk/2017/06/roswell-revealed-update.html.
Posted by Ben Emlyn-Jones at 07:21