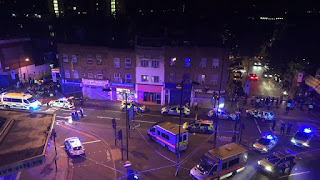 There has been an event in that the police are treating as a terrorist incident. Just after last night a man drove a van deliberately into a crowd of worshippers outside the Muslim Welfare House which is a short distance from the infamous Finsbury Park Mosque. They had just attended late night prayers at the mosque. Ten people were injured and one man died at the scene, but he was already receiving first aid before the attack and it's not known if his death was a direct result of the attack. The police arrested a single suspect. One witness claimed that the assailant said: "I want to kill all Muslims." Contrary to popular belief, right wing violence is a rare thing in . Hate crimes perpetrated by white heterosexual males are definitely no higher than those perpetrated against WHM people by non-WHM's. The last time something like this happened and the police escalated it to the level of a terrorism offence was the case of Thomas Mair who is said to have murdered the MP Jo Cox. I don't believe this and explain why here: http://hpanwo-radio.blogspot.co.uk/2016/12/programme-214-podcast-trial-of-thomas.html. It is inevitable that a backlash would occur considering the heightened tensions of the last few months, for example see: http://hpanwo-voice.blogspot.co.uk/2017/06/london-bridge-attacks.html. The shock among Londoners about the fire, although unrelated to terrorism in itself, could have acted as a trigger. As I say in the link above, I'm in the process of assessing all the evidence, but so far I'm satisfied that this and the incident were not false flags. There are now quite enough real jihadist nut-jobs in the country to make staging fake terrorism unnecessary. The government have deliberately made this happen; they have not just allowed it to happen through liberal weakness. They knew exactly what they were doing and their psychological warfare operation is bearing results. Counterattacks on the Muslim community are also a part of this psychological warfare operation, even if they are not secretly directed by state operators. The man who carried out this crime may well have simply lost control of himself emotionally out of sheer outrage generated by the recent Islamist atrocities, both real and staged. I'm sure somebody will try to blame Tommy Robinson for this, but I don't think that's fair. Robinson has never advocated violence. However I do think his former organization, the English Defence League, was founded secretly by the deep state in order to play a role in the future European civil war they hope to generate, see background links below for details. It is vital for people on both sides of the community to keep a calm and rational head to prevent the outcome that they are being goaded on to produce.
See here for background: http://hpanwo-voice.blogspot.co.uk/2013/08/engineered-islam.html.
And: http://hpanwo-voice.blogspot.co.uk/2016/08/anjem-choudary-arrest-blocked-by-mi5.html.
And: http://hpanwo.blogspot.co.uk/2010/01/muslim-clerics-are-they-shills.html.
Posted by Ben Emlyn-Jones at 18:06

Hi Ben, yeah nice one mate. I do reckon your muslims had it coming to be fare and this fellow tho I dont condone what he did you can understand it to be fare. Only one of theres dyed. Proper sickoned me seeing Corbyne being so upset saying how shocked and that he is but none of that with your manchester or london muslim atrocitys, oh no not for his own people. Your right Ben that the great tommy robinson will get the blame, that is certain to be fare mate. Do you think EDL are state mate? An old mate of mine from the footy days was in column 88 in the early 80's and they were state ran. I since heard part of something called operation gladio ran by your Nato which if your commies invaded (russia was red back then) then the Column would be like a gorilla army sort of thing. Be grate if you do a blog on gladio mate. I've met a few lads from combat 18 but cant really talk about it to much mate. Cheers Baz.

Hi Baz. No innocent person "has it coming". Of course I understand why people get angry. It's possible if a man has an anger mangement problem and maybe has a few beers he could do something like this. Red mist etc. I just hope enough people can keep their cool, on both sides, to stop this escalating. I did do something on Operation Gladio. i brought it up with Nick Kollerstrom on HPANWO Radio a few times. All the best. Ben