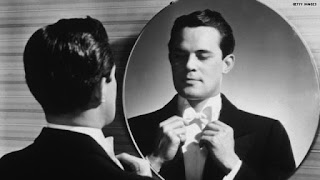 An article has come to my attention that claims conspiracy theorists are likely to be narcissists. Narcissism is a personality trait that includes excessive vanity, a grandiose opinion of one's own qualities and abilities; and sometimes these cover up internal low self-esteem. The word originates from Greek mythology, a story about a man who fell in love with his own image reflected in a pool of water. This new idea about conspiracy theorists comes from a study carried out by psychologists at the . They conducted an online correspondence with a number of people asking about their belief in popular conspiracy theories, for instance: Were the moon landings faked? Do governments carry out false flag terrorism on their own soil? etc. Alongside this they were given a questionnaire that gauged their narcissistic personality traits. There was a distinct correlation between those who scored high and those who were open to conspiracy theoretical ideas. The lead author of the report, Dr Aleksandra Cichocka said: "Narcissists think that they are better than other people. At the same time, they are convinced that others are constantly trying to undermine them. This fosters paranoia and a conviction that others might conspire against them... We find that people high in narcissism are more likely to believe in various conspiracy theories. This does not mean that all narcissists believe in all conspiracies. It also does not mean that everyone who believes in some conspiracy theories is necessarily a narcissist." Interestingly, despite the statement from the article's author: "In the internet age conspiracy theories can incubate in quiet corners of the web, but it may be psychological predispositions of believers which keep them alive, rather than cold hard facts." There is almost no discussion of any factual issue. They do refer to Dr David Grimes' explanation, as have I, see here at about 46 minutes in: http://hpanwo-radio.blogspot.co.uk/2016/03/programme-179-podcast-marcus-allen.html. It's only when you get down to the comments section that people start asking the obvious question: What if some conspiracy theories are real? These days in the media, the comments are always far more interesting than the newspaper articles. Source: http://www.dailymail.co.uk/sciencetech/article-3482408/Believe-conspiracy-theories-probably-narcissist-People-doubt-moon-landings-likely-selfish-attention-seeking.html. I hope this study is mistaken because narcissists are usually very unpleasant people. Their inflated ego tends to regard others as inferior and objects of contempt; either that or the hidden low-self-esteem makes them feel others as threatening and therefore to be treated with hostility. I decided to test myself using this online survey: http://psychcentral.com/quizzes/narcissistic.htm. I scored 14, which is dead on the median average. According to this test I am not a narcissist. I'm sure readers will agree that my level of conspiracy theory belief does not need additional testing.