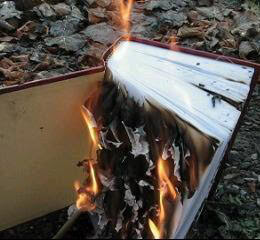 On Saturday it was September the 11th 2010, the 9th anniversary of the 9/11 attacks. The Revd Terry Jones (After he finished Monty Python!) says we should all burn Korans on every September the 11th. This sounds to me like another provocation tactic like those Danish cartoons. Also it serves to refucus the public on the "real" issues involved: The Muslims did the 9/11 attacks and it was not a govt conspiracy... just in case we've forgotten!
It it really sacrilege to burn the Koran? Well, yes. But only because it's sacrilege to burn any book. Books are objects of beauty and wonder, the hallmark of civilization. To burn books is the cypher of barbarism and tyanny.
Posted by Ben Emlyn-Jones at 08:21