Michael Wood and the Jeevika Trust 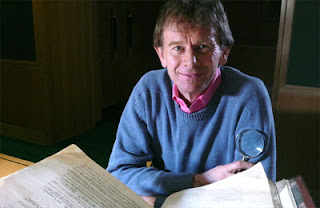 Last night I went to a lecture by the historian Michael Wood at the Royal Geographic Society in London (See: http://www.jeevika.org.uk/MichaelWoodLecture2010.htm) Wood is a TV personality I admire a lot, and not because of his TV appearances in tight jeans! Although many do; in fact I couldn’t help noticing that the majority of the audience were female! He is known actually as "thinking-woman's crumpet" because of his combination of looks and brains. I like him for his ability to educate and inspire; not only through his considerable knowledge but also his passionate and charismatic style. His programmes are like poetry! He did a speech on the culture and history of southern India, one very distinct from that of the north. The lecture was organized by the Jeevika Trust, an organization that promotes a lot of the Post-Illuminati World ideas that I do; see links above. India is the oldest living nation on Earth and its traditional smallholder farms and local village economics have existed for over 5000 years. They have survived the onslaught of modern Western cultural imperialism which has polluted much of Indian city life as it has everywhere. A third of India’s population still live in villages, that’s almost 500 million people! Poverty is still a serious problem there, and village society faces new threats, from GM crops (See: http://hpanwo.blogspot.com/2009/06/alternative-view-ii-part-2.html) and from Big Brother policies. The Indian government is becoming more belligerent. It’s been building nuclear submarines and has new longer range missiles. It announced recently that it wants all its citizens on a biometric database, that’s 1 in 6 of the world’s population, so this has implications for us all! But I feel optimistic because of movements like the Jeevika Trust which aim to preserve traditional human-scale society. This desire has influenced many Western thinkers, most notably EF Schumacher (See: http://www.schumacher.org.uk/). I’ve recently bought a copy of Schumacher’s book Small Is Beautiful. Ideas like these can spread from India all over the world.

I got to talk with Michael after the lecture and he told me that his 1990 series Legacy, will soon be out in a new edition on DVD. I've wanted to know this for years because it's his best programme and I've only got a scratchy old VHS of it.
Posted by Ben Emlyn-Jones at 09:28