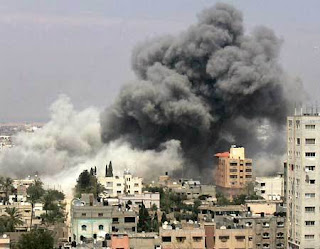 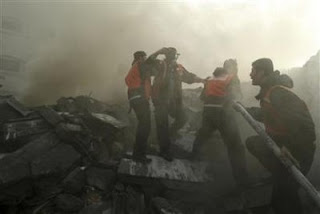 This last couple of weeks Israel has invaded the Gaza strip; just three years after ending its 45-year occupation of it. The decision to invade was triggered by a series of rocket attacks on several cities in southern Israel by Hamas in Gaza… or at least we’ve been told they were launched by Hamas in Gaza.

Someone at work said several years ago that Israel is a "Beacon of civilization and democracy in the barbarian sea of the Middle East". I consider it one of the most brutal regimes in the modern world. It's very obvious that they're using the excuse of the Hamas rocket attacks (or those supposedly by Hamas), which have only killed a handful of people, to launch a genocidal assault on the Gaza strip. The country itself is tiny; it would easily fit inside Greater London! Someone online reckoned I didn't know what I was talking about. "Are you an army general?" he asked. I replied: “OK, lets talk weapons and tactics.” I asked him about the Tomahawk Land-Attack cruise missile. It can be launched from land, air or sea, even underwater from a submarine. It has a range of over 2000 miles and even from that range, can hit its target within 6 feet. Israel has all the armament and intelligence assets of the United States; if it wanted to it easily could take out those missile batteries with no additional loss of life at all, but oh no! They have to launch a full-scale blitz and invasion drop bombs and wipe out the entire area. My opponent has yet to respond to my post.