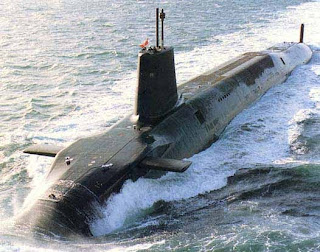 Many years ago when I was a young naval recruit, I dreamed of going to sea on a Trident submarine. I never achieved that ambition much to my chagrin at the time, but I look back now and realize that it was a great blessing in disguise. The Trident system is now aging and UK Government is currently going through the decision-making process of whether or not, or if so how, to replace it, see: http://www.bbc.co.uk/news/uk-politics-23117303

Submarine-launched ballistic missiles, like the nuclear weapons they deliver, are a virtual icon of the Cold War with the which engulfed the world between the end of World War II and the late 1980's. The purpose of the nuclear arms race was to create a "deterrent" based on the fact that nuclear weapons are so destructive that any use of them would be instantly fatal to any enemy; therefore any enemy that possessed nuclear weapons themselves could not be attacked because their retaliation would inevitably result in the same outcome for the attacker; it was a suicide pact. It became known as "MAD- Mutually Assured Destruction", that most infamous acronym. Over the course of the Cold War both sides spent trillions of pounds building up their nuclear arsenals, often at the cost of diverting funds away from healthcare, education and industry; nothing exceeded maintaining the nuclear deterrent on the scale of priority. "Jobs not Bombs" became the prime slogan of the anti-nuclear protesters. As technology progressed and missiles became more accurate the possibility emerged that a nuclear-armed enemy could in fact be defeated without subjecting yourself to retaliation, if it were possible to destroy all the enemy's weapons delivery systems before they had a chance to fire back at you. Both sides tried to outdo each other in double, triple and even quadruple redundancy by building more and more weapons, in the hope that the other side would never be able to guarantee targeting all their weapons, because there were too many of them, and the precious deterrent could be preserved, but it was an impossible situation because you couldn't stop the other side simply building more missiles; and so on and so on, ad infinitum. The only solution was to put weapons on the one platform which is totally invisible and therefore cannot be targeted: a submarine. The Soviets launched Project AV 661, the first submarine armed with nuclear ballistic missiles, in 1956 and the Americans quickly built and launched their own in response, USS George Washington, in 1959; and a new stage in the nuclear arms race had begun, beneath the sea. The Trident submarines and missiles are the most recent development of that race being first deployed in 1979. However a few years later Mikhail Gorbachev was appointed Soviet premier and the Cold War was wound down; in 1991 the was officially disestablished and it was all over.

For anybody who lived during the Cold War the idea that nuclear weapons, least of all a full deterrent, would still be needed after the end of it (a wistful concept in those days), would be preposterous. It would be directly contrary to all government rhetoric at the time. Yet in the world today little has changed in the formation of the nuclear arms systems of major Cold War nations. We are now facing what would have previously been unthinkable, a new completely post-Cold War generation of global nuclear deterrent, the replacement of Trident. Post-Communist has gone the same way; indeed it has already launched some of its new Borei class submarines: http://www.youtube.com/watch?v=fFlX6AHGmaQ. , and more recently , have joined the A-list of nuclear-armed nations. We are now back in a situation that it feels like we never left, a world in which there are nukes everywhere and everybody is too scared to get rid of them in case their neighbour doesn't. This must mean that nuclear weapons were never a unique feature of the Cold War to begin with; the Cold War was just the excuse to develop and deploy them. The cost is as crushing as it ever was; the 's Ministry of Defence estimates the total cost of "Successor", Trident's replacement, would be fifteen to twenty billion pounds; that's enough money to rebuild the ten times over! The Government is considering cheaper options that reduce capability but are more affordable, like three submarines instead of four. At the moment the Trident system can maintain "CASD- Constant At Sea Deterrence" with a single boat out at a time and the other three in port on maintenance and training. With just three boats, CASD might have to be dropped in favour of a deployment only if the political situation heats up. They might build smaller boats with fewer missile tubes, or even abandon the concept of ballistic missiles altogether, and instead use existing SSN's- fleet attack submarines, armed with cruise missiles. Another option is to do away with sea-based weapons altogether and replace them with land or air based systems. 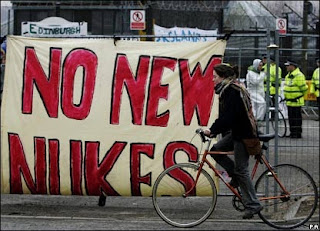 However there's another option I can think of that has not yet been suggested by the Government: don't replace bloody Trident at all! Let the powers-that-be stand by their original Cold War flannel and admit nuclear weapons were in existence purely to protect the "Free World" from the "evil Commies" and once that job was done we wouldn't need them. The Russians can help by aborting their own Bulava missile and Borei-class submarine programmes; the same goes for the other nuclear-armed nations. The attempt to justify the lunacy of replacing Trident is pathetic; David Cameron names as the menace for which this very expensive white elephant in vital: http://www.bbc.co.uk/news/uk-politics-22031893. There may be danger, exaggerated to make his point, but no "uncertainty" from the "regimes" he talks about because these regimes are being set up by the very corporations and states that then tell us we need nukes with which to fight them; the solution to the danger is not to set them up in the first place, duh! Apart from the cost, there is also the hazard related to nuclear power and weapons construction, and the toxic radioactive waste products from it; cancer hot-spots around weapons planets and shipyards servicing nuclear submarines are a fact, see: http://www.state.nv.us/nucwaste/news/sfexam04.htm. At the moment is about to choose whether or not to remain in the , see: http://hpanwo-voice.blogspot.co.uk/2012/01/scottish-independence.html. If the vote is for independence then the Royal Navy's Trident base at Faslane will almost certainly have to close, adding to the already considerable costs because a new one will have to be built in England or Wales; where, in your back yard!? Even military experts are warning the Government that replacing Trident is a very unwise idea. In a word, we don't need it and it causes nothing but problems.

Nuclear weapons are essentially a form of psychological warfare. They can never be used in combat because any use would result in immediate defeat for both sides... not to mention risking the devastation of the entire planet. The power of nuclear weapons lies entirely in the fear we have for them in our minds, as was illustrated so well in Stanley Kubrick's satirical film Dr Strangelove, see: http://www.youtube.com/watch?v=2yfXgu37iyI. In fact the researcher Bruce Cathie believes that in any nuclear exchange the vast majority of the weapons could never detonate anyway, and at a higher level those who wield them know that, see: http://www.antigravitymovie.com/cathie.htm (Bruce Cathie sadly died a few weeks ago, RIP). But so long as we think they will work, that's all that matters. Whatever the truth behind this theory there is no doubt that nuclear weapons are in essence a symptom of the relationship between we, the people, and those we allow to rule us. In this day and age their overriding strategy has changed little and is really very simple: make us scared! Induced fear of enemies, either non-existent or controlled, has led us to accept the most unpopular and pathological policies or actions imaginable; there is no depravity we will not stoop to if the Government know how to frighten us enough to make us do it. I think if we, the people, reject nuclear weapons it will be an encouraging sign that the grip of fear the Elite have enjoyed with us is slipping.
Posted by Ben Emlyn-Jones at 17:07